As our time in New Zealand was almost at an end, our friends suggested that we visit Rotorua with them over a weekend.

Rotorua is about 230km from Auckland and is a major destination for both domestic and international tourists. It is known for its geothermal activity, and features geysers, bubbling hot mud pools and thermal springs … and for a smell similar to “rotten eggs” (due to the hydrogen sulphide emissions).

We booked the Saturday night into a hotel in the center of Rotorua and only had time (and money) to visit a couple of places … it is quite expensive to participate in the activities in Rotorua … one can see that they cater for tourists.

Our first stop was at the Huka Falls, which are a set of waterfalls on the Waikato River that drains Lake Taupo. 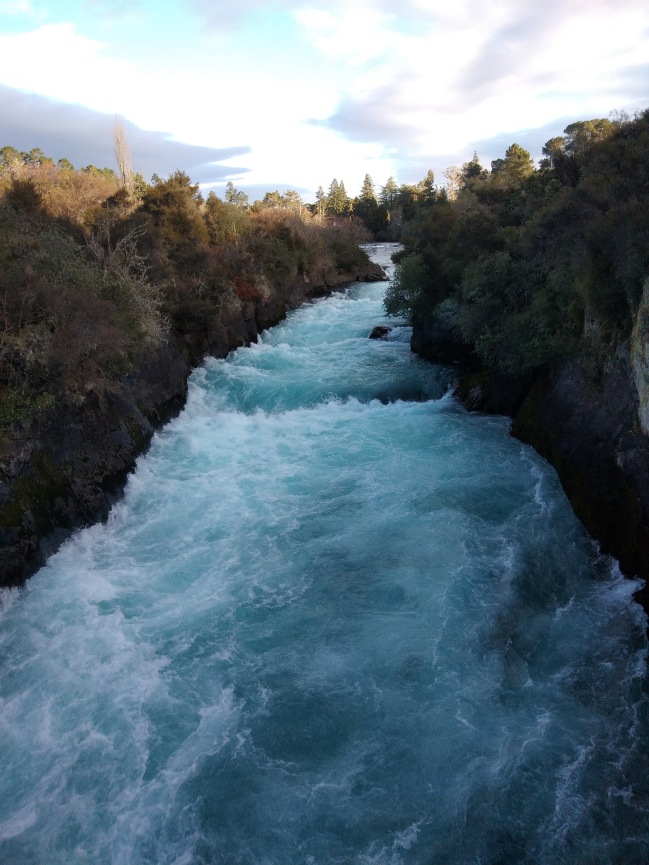 Upstream from the Huka Falls, the Waikato River narrows into a canyon

There was a jet boat with passengers on the river performing all kinds of tricks – apparently it is half an hour of thrills, fun and excitement … we decided not to buy tickets as it was already late afternoon and just way too cold!

A jet boat at the foot of the Huka Falls

On the foot bridge at the top of the falls 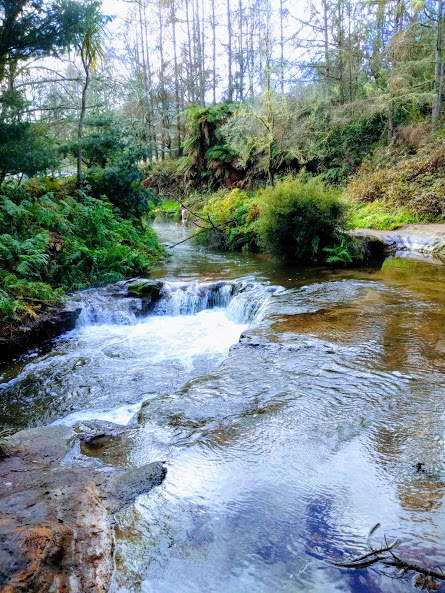 Some people were sitting inside the thermal pools, while others just had their feet in the hot water

No bathing costumes,  but we did put our feet in the water … and it was really nice

VISIT TO REDWOODS TREEWALK … and no photo’s:

Of our next excursion, I have no photo’s … we’ve visited he Redwoods Treewalk in Rotorua … with a staggering 23 suspension bridges!!!  Now, you remember my fear of heights and motion sickness …?

So, the only 2 things I can say about this:

Go and have a look at www.treewalk.co.nz … there are beautiful photo’s …

The next day, we headed out to Wai-O-Tapu Thermal Wonderland. It is just a short drive from Rotorua and an area in which the landscape has been sculptured by geothermal activity and where unique features can be viewed from good designed tracks.

But first, we had to watch the performance of the well-known Lady Knox – this geyser is induced to erupt daily at around 10:00 by dropping some “powder” into the opening of the vent. 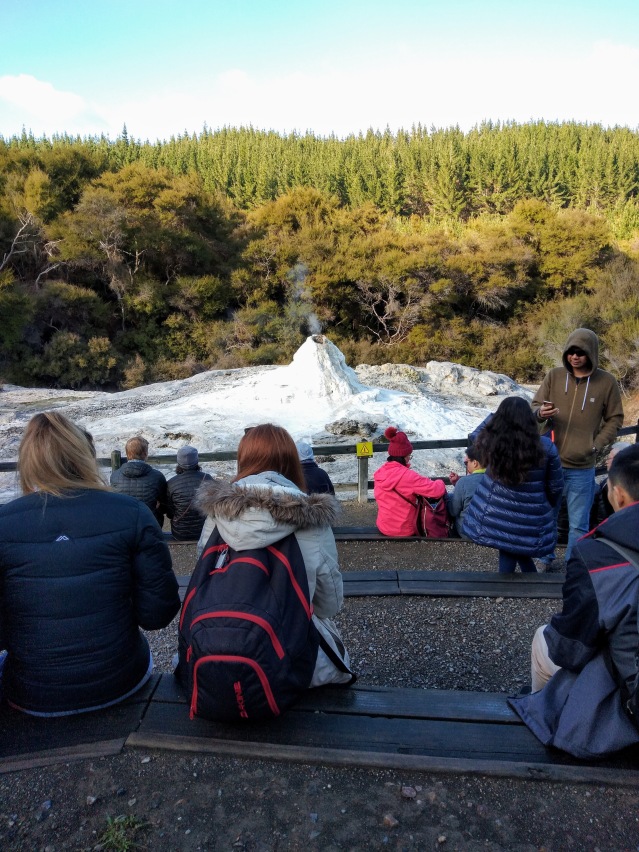 We are waiting for Lady Knox to start with her “performance” … 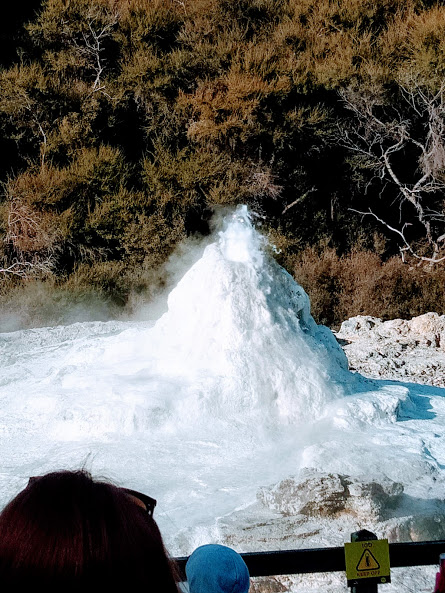 At first, the eruption was not that spectacular … only a little bit of steam came out and we thought that was it … 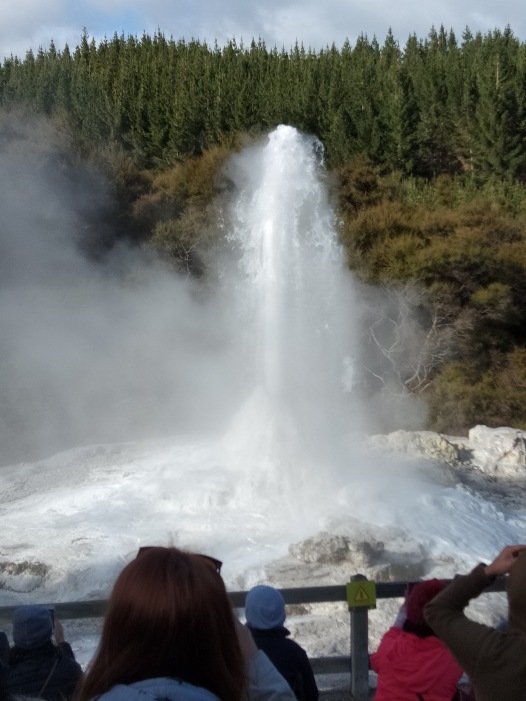 Lady Knox start to erupt after being induced

But then, after a while, a powerful eruption took place … and we all got wet 😆

Yes … maybe Lady Knox is a bit “man-made” and artificial (however, I’m not sure I want to be close by when the real thing happens), but it was nonetheless special to see.

After our visit to Lady Knox, we went for a walk over to the ever active “mud pools” in Wai-O-Tapu.

Steam rising from the thermal waters in Wai-O-Tapu

We took the self-guided walk – the tracks are well laid out – to see the bubbling mud. There is a wide range of amazing thermal areas to see, which was great.

On tour through Wai-O-Tapu 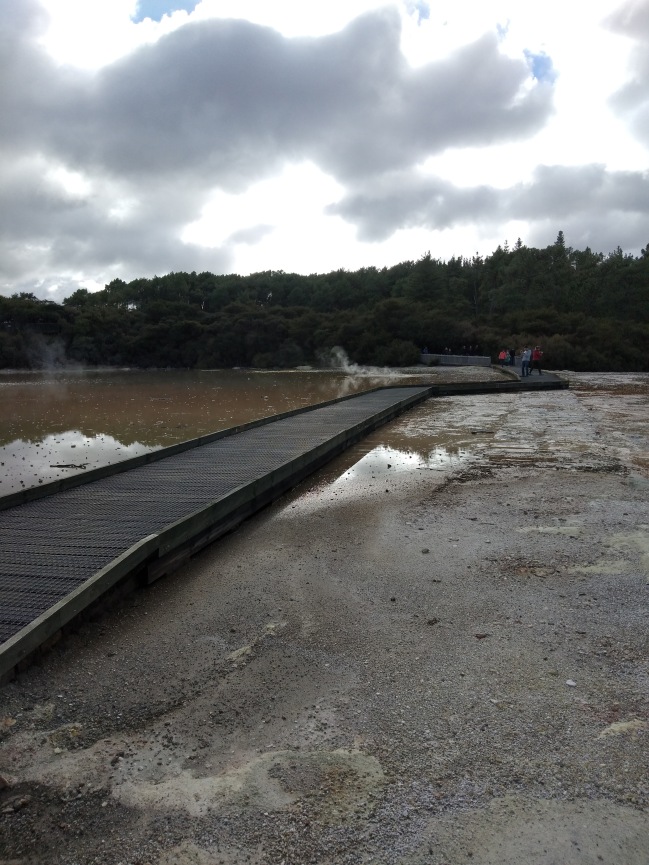 Do not fall over your feet here …

We enjoyed this day with our friends

This is a steamy affair … 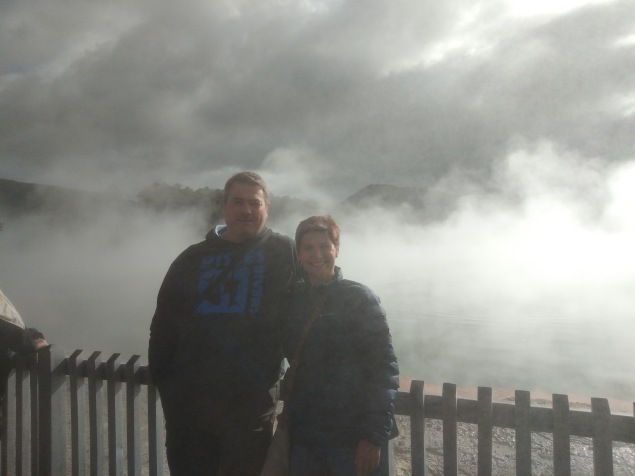 It was quite hot – we could almost take off our jackets!

It was amazing to see so many colours in one area! Although the smell was at times overwhelming (that “rotten-egg” smell), it was a beautiful walk and wonderful to see all these things we never experienced before.

The lime-green lake at the end of our walk

At the end of the pathway

As we left Wai-O-Tapu, we saw a road turning off to more bubbling mud pools. This time, entrance was free and we took a walk to see more of these pools.

We were now on our way back home … but first our friends insisted we need to have a visit to the Rotorua Luge (Skyline Rotorua). This is an adventure center with a gondola, luge tracks, a high-adrenaline swing and zip-line … and yes, for sure height was involved again … 😨

We took the gondola up to the top of the mountain … with my eyes shut until half-way up, I slowly opened them  to see the beautiful panoramic view of Rotorua …

We bought three passes each to take the luge down the mountain. Berto, Werner and Pearl went like real racing car drivers down the mountain … but I was more like “Driving Miss Daisy” … normally I’m a very responsible driver (and now I also realised I’m no Formula One racing driver)!

On the luge down the mountain!!

When I got down to the finishing line and realised how I will need to get back to the top of the mountain … I decided my luge adventure was over!

Back up with these open swings … NOT A FRICKEN CHANCE!

The “back up team” arrived and one of the drivers came and fetch me with his 4×4 and took me all the way back up the mountain – that was quite fun!

After all the adventure, we sat on the terrace and looked over Rotorua – although my fear of heights was tested properly over the weekend, it was quite an enjoyable outing.

After a few glasses of wine, the trip down the mountain in the gondola was much better and I actually enjoyed the view 😅.

The luge track with Rotorua in the background

We arrived back in Gulf Harbour late that Sunday evening after a jam-packed weekend filled with new experiences!