Should you google the words “utterly disappointing”, the meaning of these words will read as follows:

… and that is exactly how this day turned out to be!

As expected, the wind started to blow early morning – the Red Sea was not so calm anymore.

The yacht sailed the short distance back to Ras Mohammed National Park where the divers will dive another reef, namely Jackfish Alley Reef. 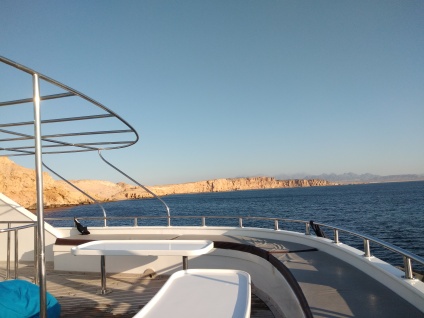 Back at Ras Mohammed National Park for the next dive

This site is named after the fact that there is an abundance of jackfish here. The northern end of the site features a downward sloping wall with lots of interesting things to see as the wall is porous and houses many life forms. 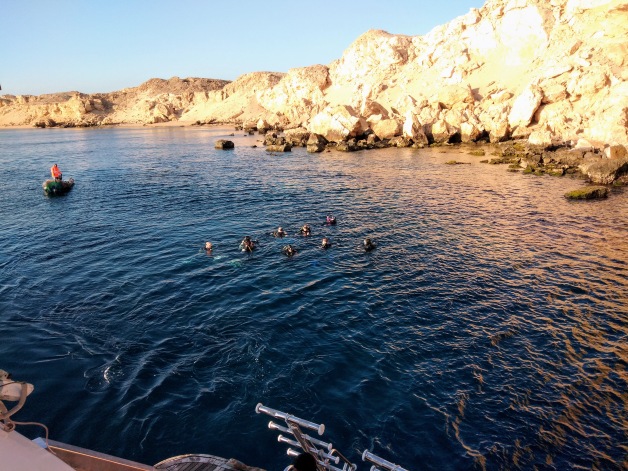 The diving conditions were not great – Berto did not take his underwater camera with, since the visibility was average. He was hoping to take more photo’s on tomorrow’s dives when conditions would improve. He was also disappointed not to see any Jackfish at the reef that was so well-known for this fish … maybe the water was too cold early in the morning for them to make an appearance …

And then … as the divers got out of the water, the head instructor asked everybody to urgently get together in the dining room …

The diving company, Blue O Two, received news that Egypt will close their airport and borders in two days’ time due to the outbreak of Covid19 … all tourists must leave the country before Thursday, 19 March at midnight 😧 …

… Our holiday in Egypt has come to an abrupt end!

No further diving (or underwater photo’s), no staying in that lovely Marriott Beach Resort in Hurghada I was so much looking forward to, no picnic in the desert, no tour to the Valley of the Kings and alas, no visit to the ancient pyramids of Giza 😔

We’ve sailed to a nearby reef, sheltered by the wind, where we had an early lunch before the yacht would hit on all cylinders to sail back to Hurghada – a trip that took approximately 4 hours in quite rough sea. 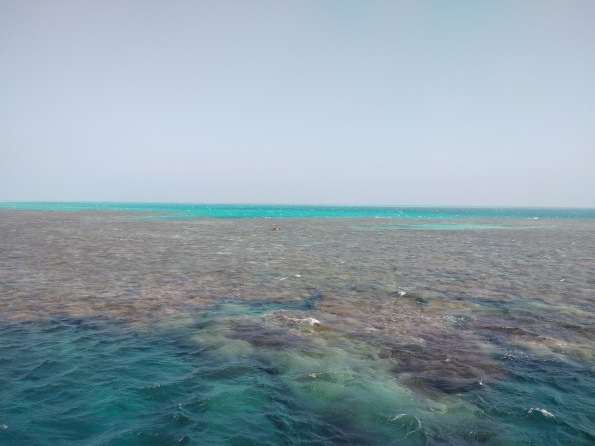 As we were sitting out on the deck for the last time on the Red Sea – all of us literally speechless about the sudden end to our holiday – an eagle circled above the yacht a couple of times. It was actually such a beautiful and peaceful moment …

An eagle circled above our yacht before disappearing in the distance

The rocky trip back to Hurghada had me in full seasickness-mode! While everybody sat around and watched a movie in the dining room, I was with my head in a bucket! Berto and Mohammed (the chef) tried to comfort me as much as they can … Berto supplied the ice on my neck and Mohammed brought lemon slices to suck on … what an end to our trip!

Back in Hurghada harbour, it was a scramble to try and find flights back home. Most of the divers had a company that arranged their flights and they had to wait for them for assistance.

Me and Berto arranged our own flights and after trying online for some time to find alternative flights, we’ve decided the best option would be to get a taxi to the office of Egypt Air in Hurghada.

A taxi trip in an Egyptian Ferrari!

A taxi trip to remember – every now and then the taxi driver will yell “Egyptian Ferrari!” and laugh out loud …

After more than 2 hours in the office of Egypt Air, we’ve managed – with great effort from the assistant there – to find flights back home!

We were very fortunate that we did not had to pay any extra costs for these flights, as Kenia Airways were part of the Star Alliance Network.

We had a few drinks with some of our new friends on the M/Y Blue Adventurer before we went to our cabin to pack our stuff – it was such a surreal end to our holiday!

At 3:30 the next morning, our taxi driver (the same friendly-half mad one) waited for us outside the harbour to take us to Hurghada Airport … I was a little amused when he strapped Berto’s diving suitcase on the roof of his taxi 😁

We were (once again) fortunate that the Le Meridien Hotel at Cairo Airport allowed us to stay in their hotel for the entire day, without paying anything, until our flight departed late that evening. The reality of the whole situation hit us, when we’ve realised it was not just the two of us, but many others that were sitting around, waiting for their flights to get out of Egypt …

Many tourists were sitting around in the Le Meridien Hotel, waiting for any flights out of Cairo

When we’ve eventually started with the boarding process at 21:30, the ground crew refused that we’ve gone onboard Egypt Air … according to them we were not allowed to fly to Nairobi, Kenia. We’ve tried and explain that we will only transit in Nairobi on our way to South Africa … it took another half an hour for highly ranked officials and the captain of the flight to convince them to allow us onboard.

An hour later than expected, we took off from Cairo International Airport!

Once we arrived at Johannesburg International Airport in South Africa, Berto managed to find us a flight to Cape Town later that afternoon …

… And, after more than 36 hours in mid-air, hotels and airports, we’ve arrived safely back home late that evening on 19 March!

We had mixed emotions … relieved to be back home safely, but also sad that our long-awaited holiday in Egypt had come to such an abrupt end.

A couple of weeks after we got back, I was looking through photo’s of our (very short) trip to Egypt and once again saw that photo of the eagle that we took on the very last day on the Red Sea … and then I remembered that I’ve read somewhere that the eagle will always know when a storm is coming … the eagle will then look for the highest point, lock its wings, and once the storm arrive, they will fly above it …

… maybe that eagle was a reminder that we have to prepare for the storm that was coming (Covid19), be strong, and try to fly above it …

We truly hope, maybe one day, we will have another opportunity to go back to Egypt to visit all those places we were hoping to see on our first trip …