We’ve heard the sweet sound of rain last night! Yes, it rained on the Tankwa Camino … what a wonderful experience. We were also happy that our tent was waterproof …

But after the rain it was extremely cold – especially in the mountainous area where we would spend most of today … and what a long and strenuous day it turned out to be!

For the first few kilometers we’ve walked on a difficult terrain … a dirt road yes, but very muddy … it took some skill to walk without sliding too much! Who would have thought we would encounter a wet and muddy dirt road on the Tankwa Camino?

But after a while, we got to the promised tarred road. We were now relieved from the little irritating stones, but in the place of that … traffic! We had to keep our eyes and ears open for vehicles on the road … and that’s when I realised that I’ve missed the dirt roads of the Tankwa Camino … 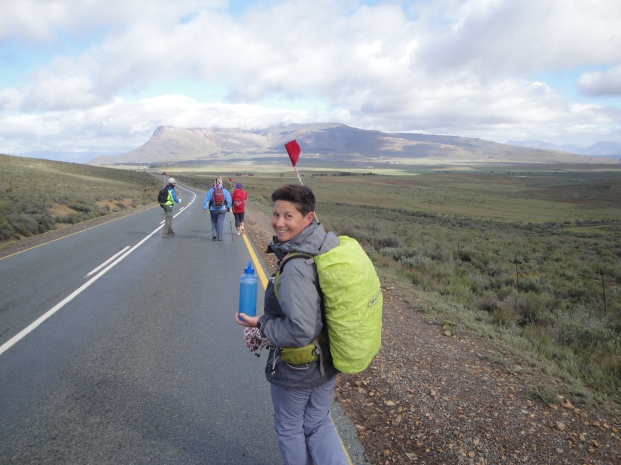 We were now on the tar road … traffic is the new danger!

We were dressed in our rain jackets … and not because it rained, but because there was an extremely cold wind … gone were the hot and sunny days.

Although it was such a beautiful landscape, we did not take a lot of photo’s today … afterwards I thought it might be because we were either overwhelmed with all the greenery and beautiful views or we’ve missed the dry land that became part of us the last couple of days.

Dams filled with water and surrounded by green grass – some people would take this for granted, but we were now appreciating these sights

As mentioned yesterday, we would walk over the Theronsberg Pass today. It is not a very high pass, but after days of walking flat surfaces, this became quite a challenge.

Here we’re standing with Liesl, Judy and Frederich at the start of the Theronsberg Pass

We could see some hikers in front of us (was probably Wayne and Rentia) and as we’ve walked higher towards the top and turned around, we could see the long line of hikers following us. The difficult part of walking the pass, is probably to get out of the way of oncoming traffic … there is not a big area next to the road where you can walk safely and it was quite nerve wrecking. 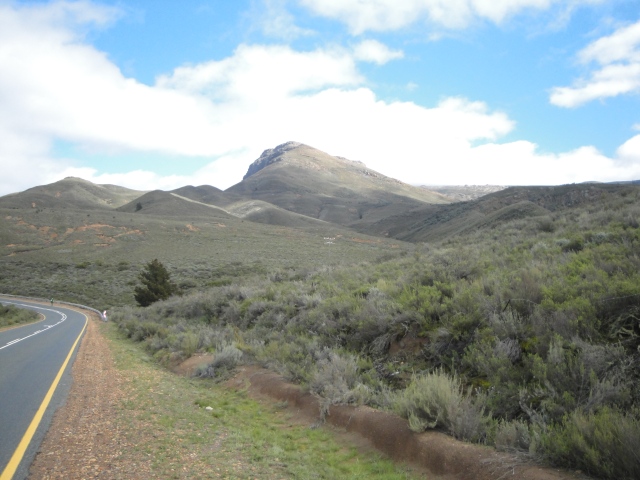 Fortunately, the cars and big trucks would take a wider angle when they saw us coming (must be the red flags that warned them of hikers), but it was at the corners where we had to be extra cautious. We were quite happy to have reached the top of Theronsberg Pass without any problems.

When I think back at this day’s stage, my most vivid memory is of how cold it was! Normally it would be cold in the early morning and then we would take our jackets and buffs off for the rest of the day, but today we’ve stayed in our warm clothes … not even a brisk walk would warm us up!

The scenery was really beautiful. We’ve had stunning views of the green valleys and saw so many dams filled to the top with water.

It was a really long day – the longest yet – and we were now looking forward to reach the camp site. Me and Judy decided to take the last 5km a bit easier, while Berto and Liesl walked ahead. After we’ve conquered the last mountain, we could see the tar road for kilometers ahead … which will eventually end in Ceres tomorrow.

The Tankwa Camino banner indicated the turn off to the camp site – which was probably another kilometer away – but we’ve followed the beautiful pathway surrounded by colourful flowers and wonderful smelling bushes.

Liesl & Berto arrived at the camp site’s turn off, followed by me and Judy 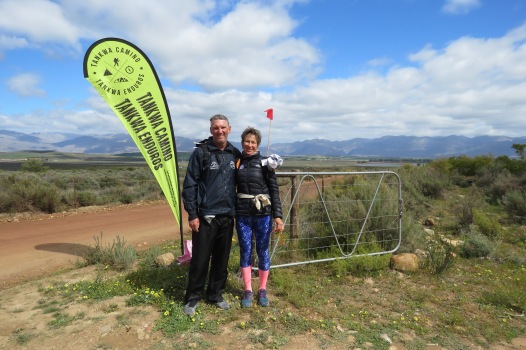 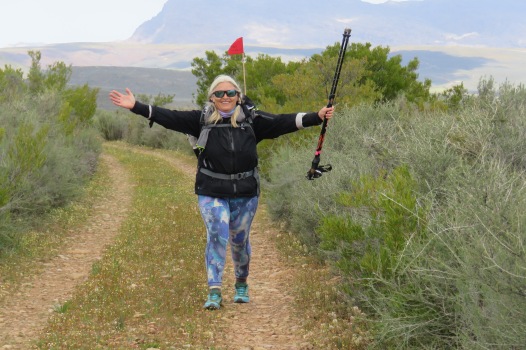 Wayne and Rentia was once again the first hikers to arrive at the camp site. Allison was also happy to have made the day! 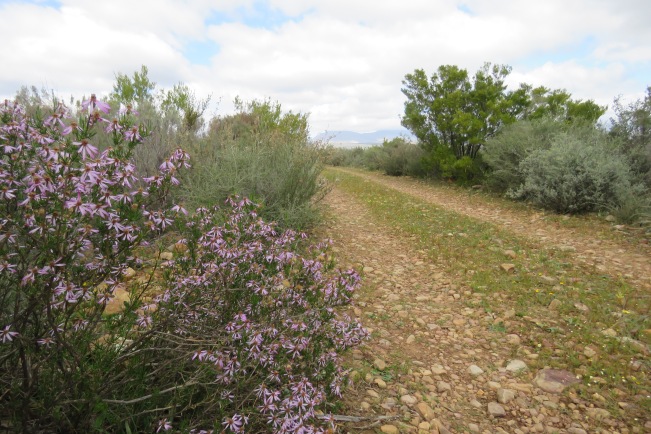 But those cobblestones were not so easy to walk on after a very long day on our feet!

And what a magnificent camp site we’ve had on our last night of the Tankwa Camino! Trees, water, grass and even permanent showers with hot water … yes, we were one happy bunch of hikers! 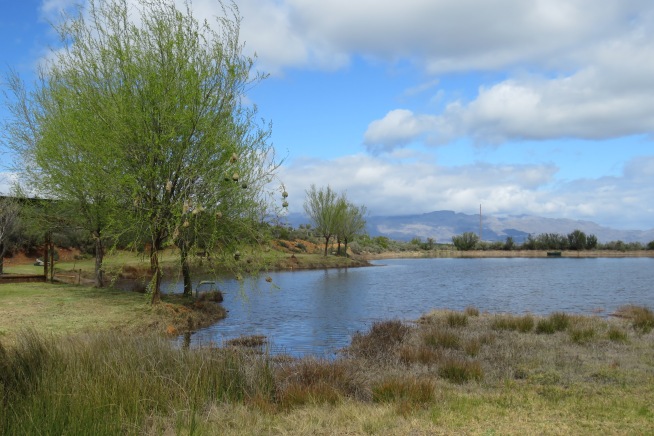 A beautiful dam at our camp site

In the late afternoon the camp site turned into a sea of colorful tents. After a day that required more than 30km of walking, this was a true blessing! 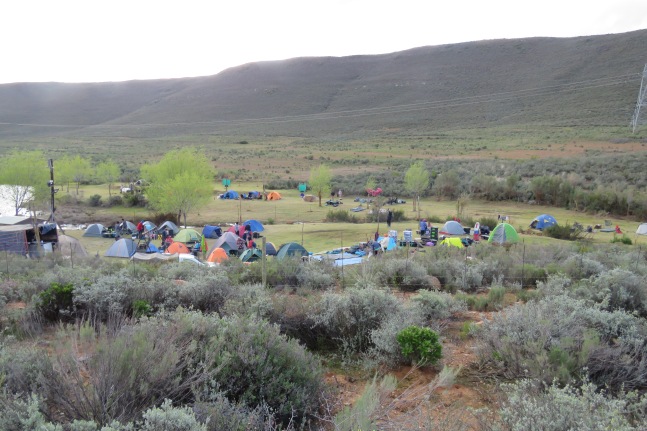 After we’ve showered (in a real shower ☺️), we’ve pulled our chairs to the front of our tents and enjoyed, for one last time, the company of each other

Zeva visited our tent a couple of times … by now, she knows us quite well and it’s great to see how she acknowledged us as her new friends. I’ve spent many pleasant hours with her over the last couple of days and I could recognise that my Camino had another purpose this time … for me, this Tankwa Camino was not specifically just for walking, but actually more to take care of Anri’s best furry friend while she was walking. For me and Zeva, this was a win-win situation! 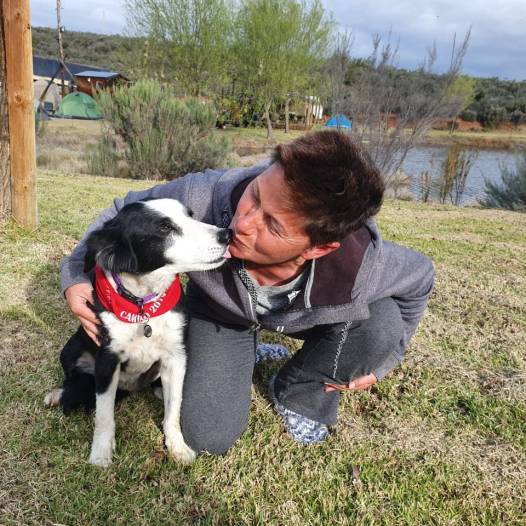 For the last time on the Tankwa Camino, we’ve put our camping chairs in a huge circle around the camping fire. We were dressed in our warmest clothes and even brought the blankets out … it seems we’ve had our coldest night saved for day nine!

The best place to be … around the fire!

As the sun sets, we were moving closer to the hot coals – one last night of camaraderie between 63 hikers and a wonderful Tankwa Camino supporting team

It was also an evening of awards … I can’t remember how many awards were handed out … but I can tell you that I’ve been the winner of the “Dog whisperer” award 😄. Thanks to Zeva, I will have a great bottle of sherry to drink on the next cold evening back home! 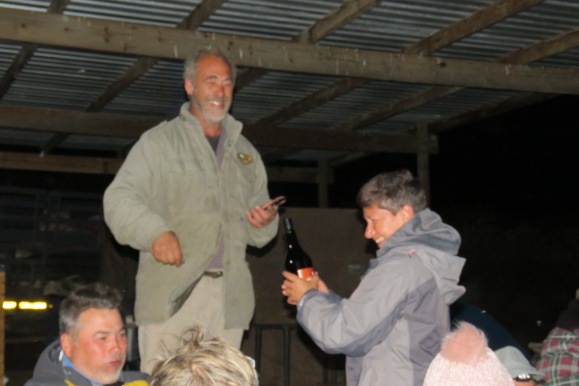 Tomorrow we will walk the last 15km to Ceres where we will end our Tankwa Camino, but for now … we will enjoy each other’s company one last time around the hot fire …