The original map actually indicates that today’s distance would be 21km, but my smart phone stopped on 26.9km … let’s take the further distance 😊

Today we will walk towards greener fields and will eventually end up in-between the mountains … a much different environment as what we’ve been used to since we’ve started to walk the Tankwa Camino.

As we’ve started to walk from the camp site, we could already see the mountains in the far distance … now we have a definite landmark where we will end later today. How is it that I’m suddenly sad to leave this dry and barren Karoo behind me?

Hikers that have walked the first Tankwa Camino a couple of years ago, decided afterwards to “plant” a cross close to the end of the Camino where future hikers can spend quiet time.

On the Camino Frances in Spain there is also a cross, called Cruz de Ferro, where hikers and pilgrims can leave a little stone brought from their hometown in memory of loved-ones or just to symbolize their journey.

It is great that this tradition is also part of the Tankwa Camino here in South Africa. You can see the cross from far nestled against the mountains. 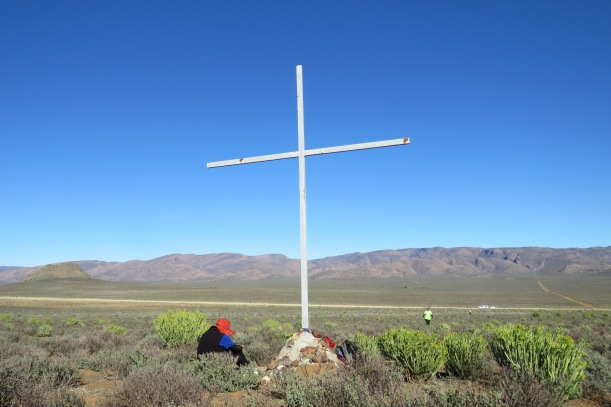 The rocks may have a letter, word or message to a loved-one on them and a small mound is already forming at the bottom of the cross. May this tradition continue on the Tankwa Camino.

Rocks at the bottom of the cross

As expected, the landscape is busy changing and we were very surprised to see a dam of water (although very small), next to the road. It also turned out to be another hot day and a thought crossed my mind to put my feet in the water … 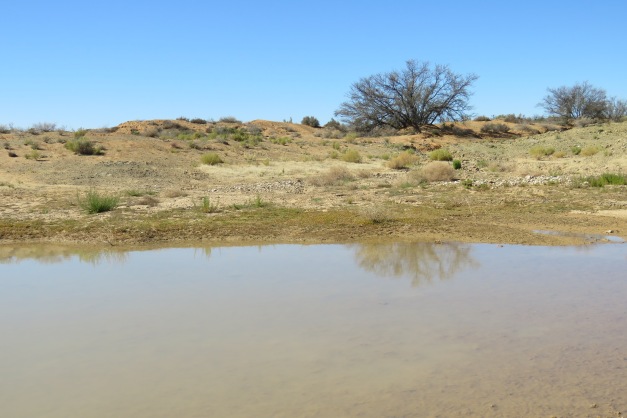 A dam filled with water … we could sit here and have a picnic!

It was quite spectacular to see the road disappearing in the mountains … for days the mountains seemed like a “far away wall” and now we were so close!

Judy and Liesl walked with us today. It was quiet amongst us, but we did mention that it was getting quite hot and that something cold would be great … and then, a vehicle coming from the front, stopped next to us. It was Johan, the owner of the Tankwa Padstal we’ve visited yesterday. He bought 15 ice creams in Ceres and were handing them out to the hikers … we were lucky to be in the front group! That saying of “the Camino provides” never gets old!

Me, Liesl and Judy were delighted with our ice creams 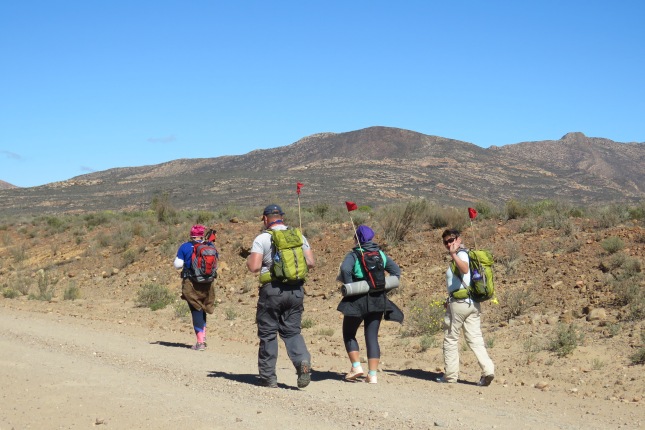 The last part of the dirt road was very rough. There were many little stones in the road and we had to choose our steps carefully. There was also a number of vehicles coming from the front (probably on their way to the festival in Calvinia) and we had to cover our eyes every now and then with our buffs against the dust. 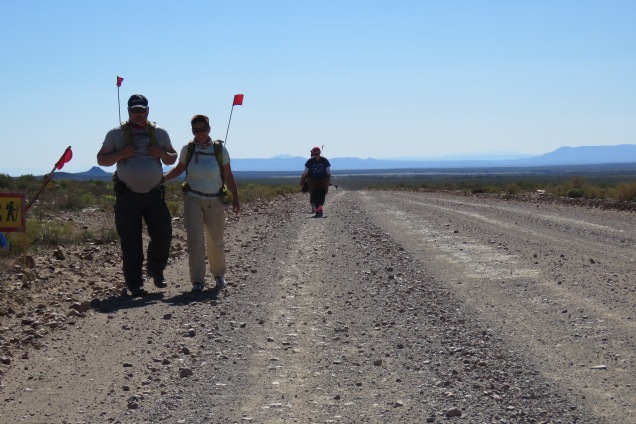 We are now in a whole new landscape. We suddenly find green bushes next to the road and see stunning rock formations. It was hard to believe that the environment could have changed so quickly. 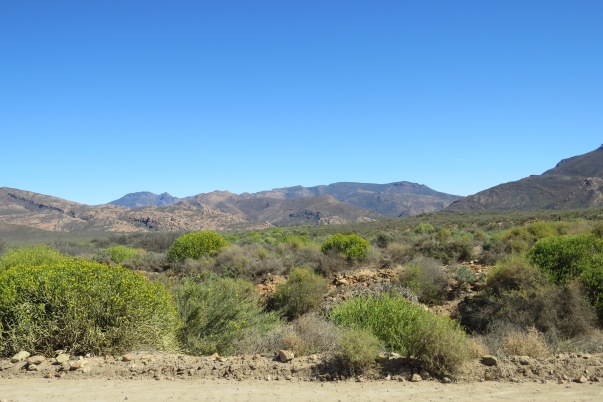 Look at those green bushes! 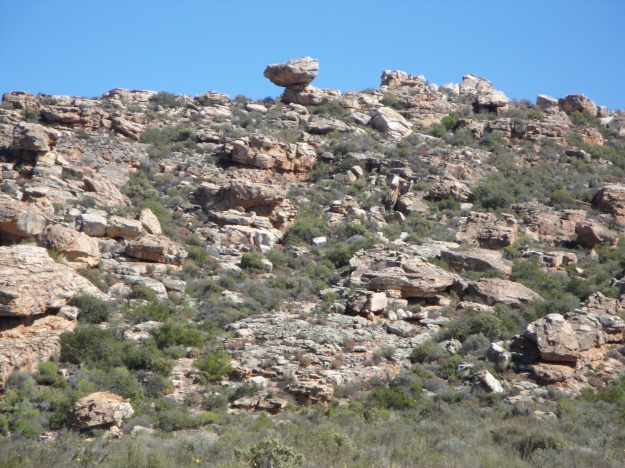 Beautiful rock formations were now part of the scenery

And then, out of nowhere, the tarred road appeared! We will only walk a kilometer or two on this road today. Tomorrow we will start with dirt road and then it will change again into tar road until the end.

We were quite surprised to see that our camp site is next to a big house (and people living there). Gone are the nights in the open fields where you hear (and see) nothing.

Our camp site is in the mountains and we have neighbors!

We’ve arrived shortly after Wayne and Rentia and they already picked a nice spot for our tents … we are camping in the garden and had a washing line!

We’ve managed to pitch our tent in the small garden next to those of Wayne and Rentia, as well as Allison’s tent

I had the opportunity to keep an eye on Zeva for a while. She caught a ride with Ds Edward’s lorry after she walked half of today’s stage. She stayed at our tent until Anri arrived – what a sweet dog she is!

Two great friends made on the Tankwa Camino – Anri & Zeva

Later that afternoon, a drizzle from nowhere appeared! Rain on the Tankwa Camino is such a bonus and not something you will experience on a regular basis.

Truia busy doing what she can do best … preparing food for hungry hikers!

It was getting cold late afternoon and Rhina mentioned that we can probably expect more rain during the night … this is when you hope your tent is waterproof!

We’ve put our camping chairs in big circles to enjoy more of each other’s company. After eight days on the road, we still have so many stories to share.

We are enjoying the companionship of our fellow hikers

Tomorrow we will hike over the Theronsberg pass – the first mountain since we’ve started on the Tankwa Camino. Maybe a good night’s rest is acquired for the second last day of our Camino …