Today is another long day on the road … but there are two milestones along the way!

It was, once again, very cold in the early morning and hikers were dressed in their warmest clothes

When the sun came out, it almost looked as if the field was on fire

Zeva, once again found her little spot behind the seat in Ds Edward’s Tankwa Camino lorry. She is such a sweet dog and, with me not being able to walk, I found valuable companionship in her.

Zeva, getting ready in her favorite spot, to go to the next overnight camp

But then, a couple of kilometers into our journey, one of the Tankwa Camino trucks got engine problems. These lorries have done several Camino’s and they are not the “newest kids on the block” 😀. 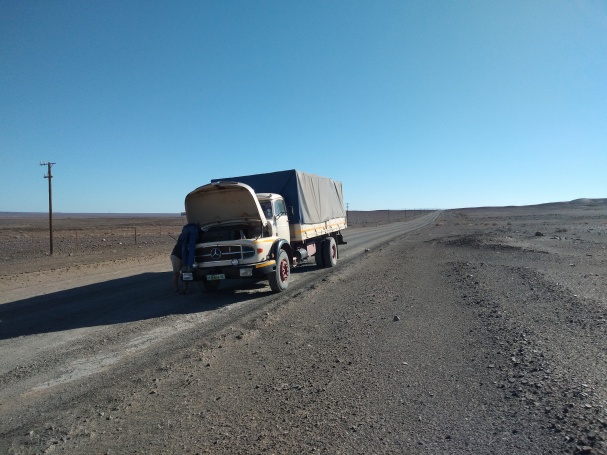 It’s not just the hikers that struggle on the rough road, the lorries also started to show signs …

The crew was unable to fix the truck and Ds Edward had to drive with his truck to the Halfway House to phone for assistance (there is reception and WiFi) … to be without any reception and WiFi could sometimes be a blessing, but then there are times that you really need it! 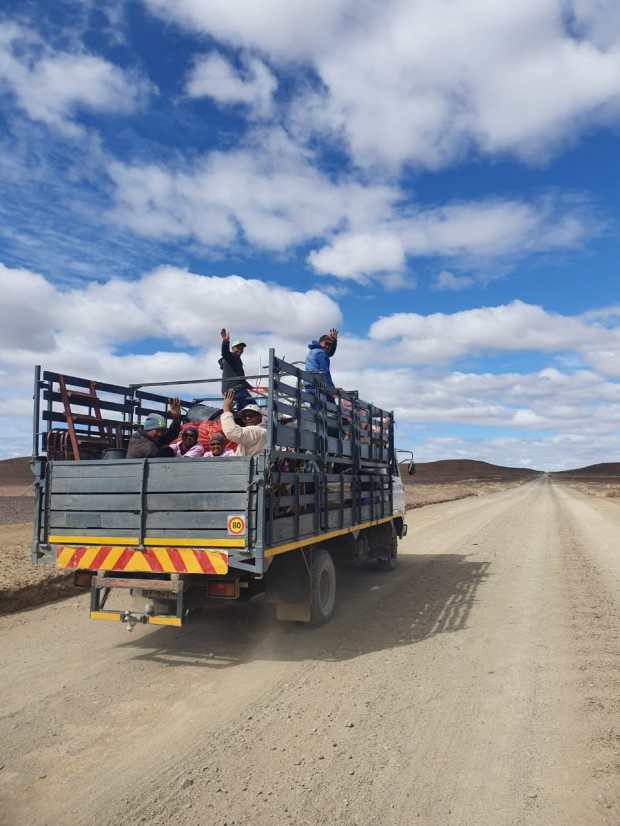 With one truck being unable to drive, all the Tankwa Camino supporting team got on Ds Edward’s truck – they waved happily at the hikers as they’ve past them

In the meantime, the first hikers arrived at The Halfway House – Berto was one of them – and they could not wait to see what this place had to offer … that’s now besides the WiFi 😅.

With everything the Halfway House offers, this might feel like a mini-mall for hikers that have not seen a shop for a couple of days!

The Halfway House might not look like much, but I can assure you, it’s worth spending some time here!

Maybe just a small building to some, but the Halfway House is a great bonus for the hikers on the Tankwa Camino

For the first time, Berto also had the opportunity to take a photo of the official photographer of the Tankwa Camino. Diana travels the whole day up and down in her vehicle to take beautiful photo’s of all the hikers … and then she cheers everybody on … it was always great to see her somewhere on the road during the day! 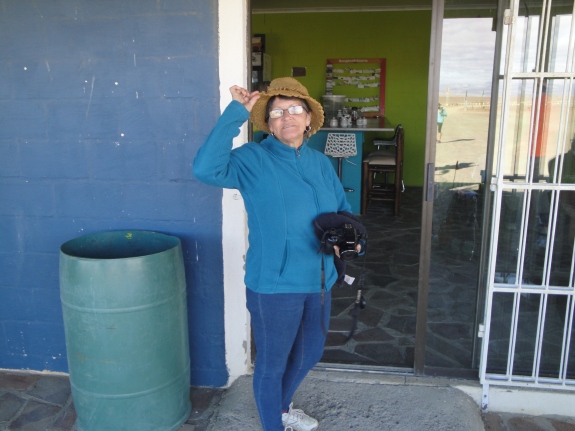 Diana, our official photographer, is ready to see what the Halfway House offers

As the hikers arrived, the Halfway House became a very busy place! It must be quite something for the owners of this place to suddenly have people streaming into their little shop! We’ve definitely enjoyed this moment on the Tankwa Camino!

A Halfway House meal to be enjoyed! “Roosterkoek & boerewors” (literally means balls of bread dough cooked on a grid over the coals and sausage) … a meal fitted for a King (and Queen) 😊

The hikers also found the best reception spots outside the Halfway House and it was quite a sight to see everybody on their phones! For the first time, in 5 days, we could make contact with our loved ones back at home … it was great … but for me, it was even better to leave that technology behind again when we’ve left! 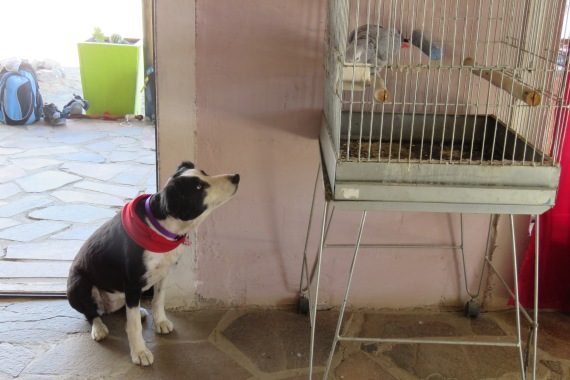 Even Zeva found a new “friend” at Halfway House …

It was a great spoil to have something to eat and drink at the Halfway House, but now it was difficult to get back on the road again … it was still more than 15km to Witwalle, our overnight camp site.

Rentia doing some stretching in the road after enjoying the delicacies at Halfway House, while Wayne and Frederich is keeping an eye out for oncoming traffic …

A few kilometers after the Halfway House, we’ve crossed borders. We have now left the Northern Cape and will walk the rest of the Tankwa Camino in the Western Cape … and towards the end, we will see a change in nature as well. 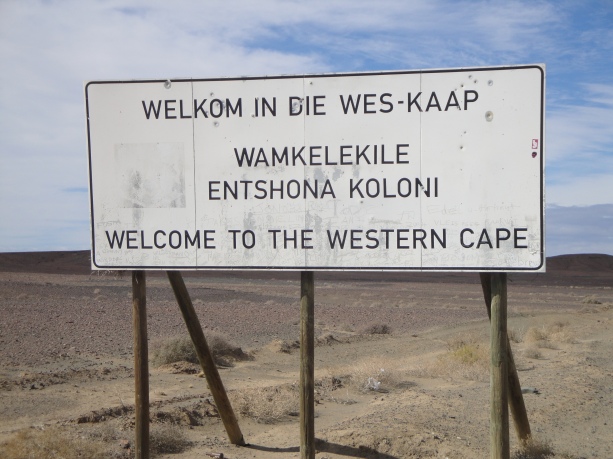 We are now in the Western Cape – welcomed in three languages, namely Afrikaans, Xhosa and English

The road was extra straight today … you could see for kilometers in front of you, with the occasional tree next to the road.

Some hikers making use of a tree’s shade, while others continue on the long and straight road

Dirt road … as far as the eye can see

Road signs were few on the way and when you see one, you can’t help but take a photo … even when that sign is a bit “amended” by someone passing earlier …

Yes … you won’t see flooding often on this road

It was always amazing to see how plants and trees survive (and grow) in this barren land. We are now probably entering the most dry part of the Tankwa Karoo and to see any vegetation here, is magical.

This tree is able to survive against the odds

The road is not just always flat and straight … sometimes you will find a little hill or turn … and then, for just a moment, it feels as if you are walking a whole new route!

What? A turn in the road and cars must slow down!

In the meantime, the broken Tankwa Camino truck got fixed and arrived just in time at the overnight camping spot before the first hikers arrived.

The broken truck was fixed and hikers will be glad to find their luggage when they arrive!

Today’s treat to welcome hikers, are pumpkin fritters (also known as “pampoen koekies” in Afrikaans). Drizzled with a generous amount of cinnamon sugar, it was enjoyed by everybody!

Pumpkin fritters – a great way of welcoming the hikers back in camp!

There is more than enough fruit for hikers to choose from in the morning before each day starts. We could choose from apples, bananas and oranges – it was great to sit somewhere during the hike next to the road and have a fresh fruit.

Delicious fruit to start your morning, as well as to enjoy somewhere on the road during the day

With today’s stop at the Halfway House, the day was much longer and hikers only arrived late in the afternoon … with aching bodies and tired feet, it took a huge effort to pitch the tents!

This evening (and the night) was one of the coldest on the Tankwa Camino! We were dressed in warm jackets and hoodies early in the evening and it was not long before we started to get closer to the fire. 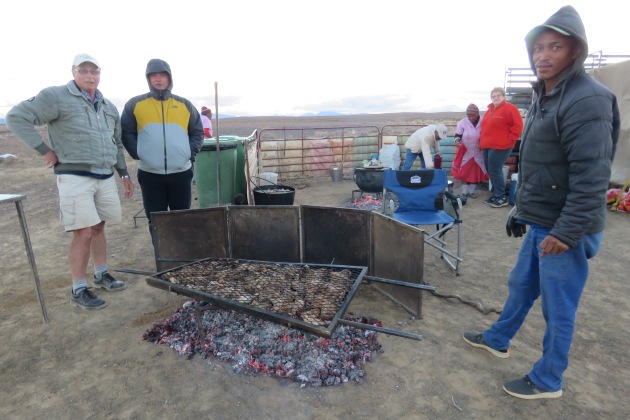 Berto is bracing himself against the cold, while Johan and one of the supporting team guys are busy getting dinner ready over the coals

Dinner time – chicken in a delicious sauce – food for our souls

A cold wind started to blow late evening and dinner was served a bit earlier tonight in order for hikers to get into their tents. Nobody complaint, because it was a long day and there was a big need to wrap ourselves up in warm blankets and get in our beds!

Another challenging day on the Tankwa Camino …