Just before sunrise, the temperature must have dropped significantly – it was bitterly cold! All the hikers were dressed in their warmest hiking clothes.

Both me and Zeva will take the Tankwa Camino lorry today – my blisters are still far from better and Zeva’s soft paws had enough of yesterday’s sharp stones in the road. She is very well trained and will stay by my side the whole day … that is until she sees or hear Anri’s voice (her owner) in the afternoon after the day’s hike … then she will run with great excitement to greet her! 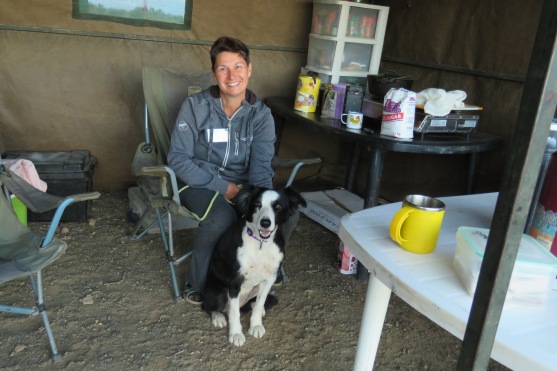 Once again, the routine of every morning is taking place as the team are packing up the camp as the last hikers left. 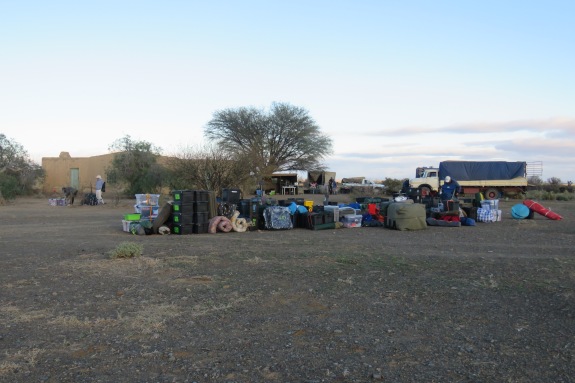 Once the sun is out, it starts to become a bit warmer. There are only a few clouds in the sky – no threat of getting wet while walking (although the Karoo could do with some much-needed rain).

As we’ve past the hikers with the Tankwa Camino lorries, we will stop next to some and ask whether they are doing ok – just another way the Tankwa Camino team are showing their commitment of taking care of everybody. 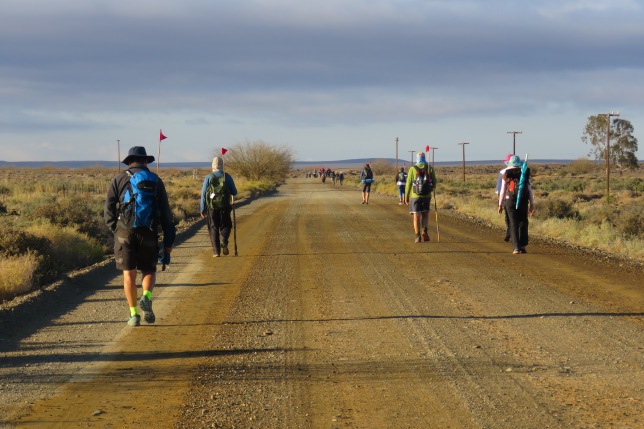 Although hikers would sometimes walk in groups, it is still possible to be on your own and not bothered by anyone else

As we’ve got to a group of hikers, we could see Anri was between them. We’ve stopped next to them and the moment Zeva heard Anri’s voice, she got up from behind our seat … excited to see her owner!

The walking surface is a bit better than yesterday’s corrugated road – I’m sure the hikers would enjoy this. We will not see many farms today and nature is appearing at some stages like a desert.

Mountains in the distance

Berto and Judy are under the first ten hikers and they were later joined by Frederich. Frederich walks with his camera under his arm and took the most beautiful pictures of the smallest little plants – we’ve jokingly called him the “wise man”, because he knows a little bit (and more) of everything 😉.

Judy, Berto and Frederich waving happingly at Diana (the photographer) – they have now covered more than half of today’s distance

We are getting closer to the Tankwa National Park, which mean we will start seeing more wildlife (if we are lucky). And we were indeed fortunate, because we saw some Springboks today where they were busy feeding on some grass and shrubs.

A few Springboks close to the road. They are well-known antelopes in South Africa

On route today, we could see the harsh reality of living in this drought-stricken area. Farms became deserted, just to eventually ended up in ruins. Every now and then we would also see an old car somewhere in the field that became part of the Karoo … all signs of how difficult it is to survive here.

Today we are literally camping next to the road, with the fence on the other side – Ds Edward jokingly said it is a “great camping spot”.

We’ve used a broom to sweep most of the small stones away where we’ve intended to pitch our tent – a small stone can become a huge rock during the night when you are trying to sleep on a thin mattress!

Wayne, Berto and me were getting Allison’s tent up while she was still on the road. Frederich is making sure we’re doing it right 😄

The wind was pretty strong and we had to make sure our tents were firmly anchored in the ground. You don’t want to run after your tent in this wind!

Rhina, Ouma Lisa and Truia are preparing the most wonderful sweet treats for hikers to enjoy when they’ve finished each day’s stage. We could not wait to see every afternoon what was on the menu! 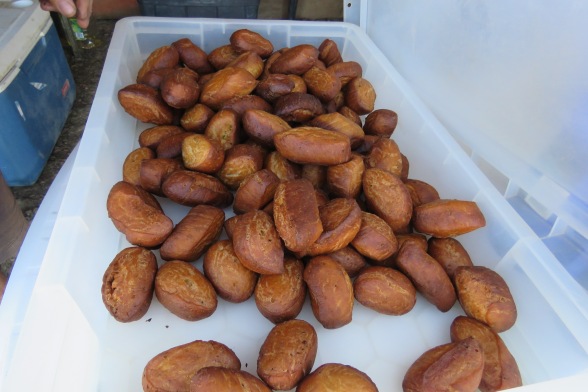 Although the wind was blowing, we’ve enjoyed some relaxing hours next to our tents in the company of other hikers.

Almost blown away by the wind, but Berto and Frederich enjoys a beer together, while Judy are sipping on some well-deserved gin 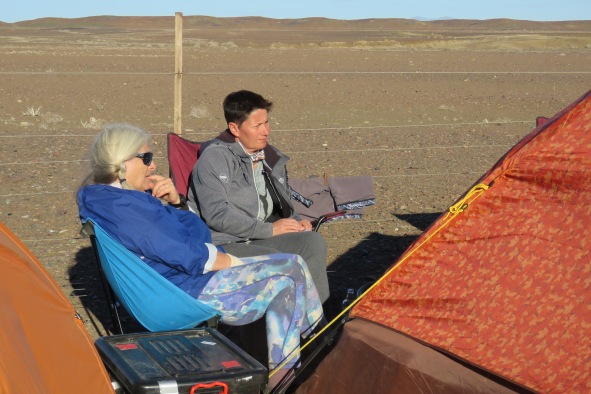 The afternoons of getting together after each day’s hike, is cemented in one’s memory. This is the time when we get to know each other better and hear wonderful stories. While enjoying this special time, the food is on the fire and your hungry stomach is protesting against the pleasant smells, you don’t want to be anywhere else!

The black pots on the fire meaning dinner is getting ready

Here on the Tankwa Camino we also have “passports” that needs to be stamped every day … just like the “credentials” on the Camino de Santiago. The stamps are different pictures which represent the overnight spot, one hundred percent Karoo … we will show you the completed “passport” at the end of this Camino. 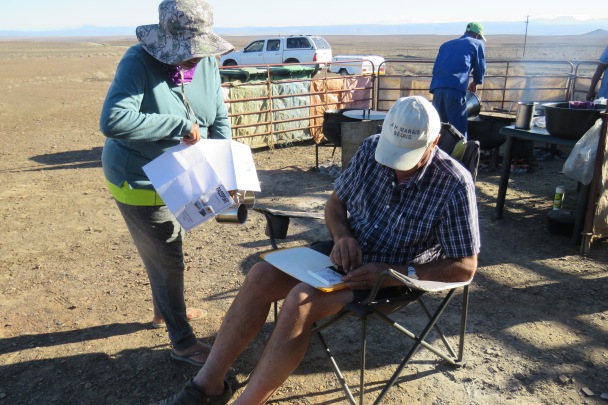 Johan stamping one of the hikers’ Tankwa Camino passport

We had such a laugh when we saw where the toilets were set up today … across the main road! But we are sure, when the need arise to visit the toilet, you won’t have to wait for traffic to pass before you can cross the road!

Our toilets were on the other side of the main road today … but fortunately, it was not dangerous to cross the road

It was a great day … the hikers enjoyed the road and I had a fun time with Zeva … all and all, a hugely successful day!