These days, you hear many of the outdoor seekers talking about ‘glamping’ … which is actually just another word for glamorous camping. Google described this as “camping with facilities more luxurious than those associated with traditional camping”.

Well, then I suppose we can confidently say that a stay at Sea Shack is absolute ‘glamping’ 😁. 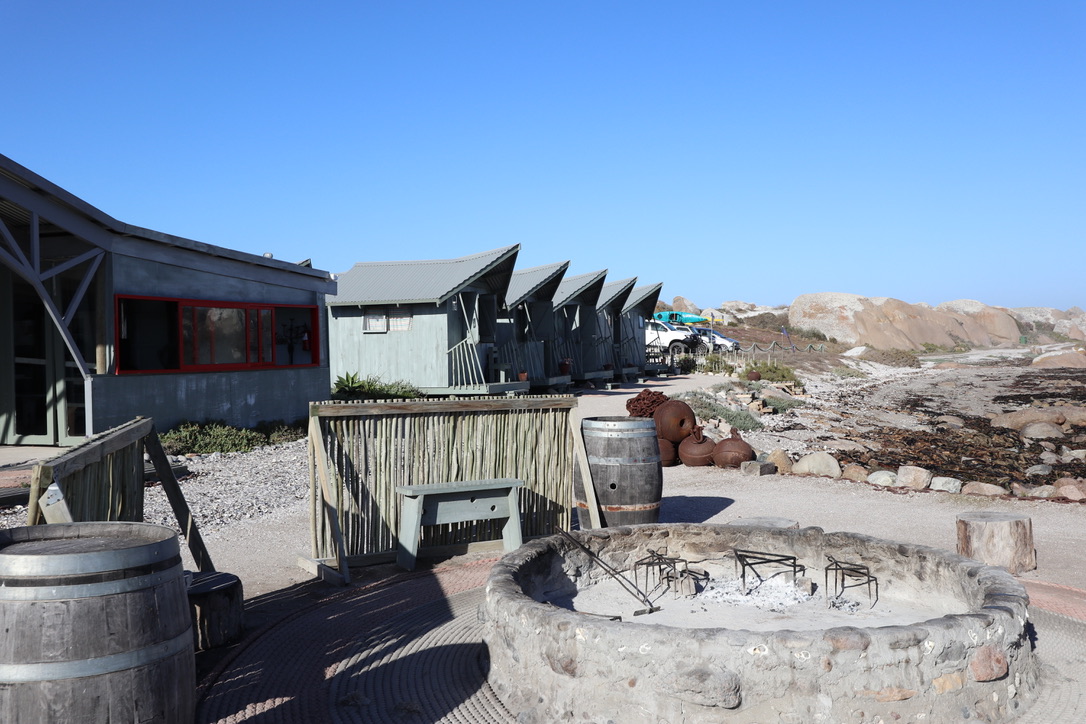 The shacks are facing the small bay – you literally wake up on the beach!

We love camping … we’ve got the tent, mattresses, sleeping bags and all other camping equipment … but we’ve read about Sea Shack where you only bring your clothes, food and something to drink and voila … you are on a glamping experience! We’ve decided to visit them during the week (they are very popular and you will struggle to find an open weekend if you don’t book in advance).

Sea Shack is in the Cape Colombine Nature reserve between Paternoster and Tietiesbaai on the West Coast. We’ve camped many times at Tietiesbaai and now it was time to leave the tent at home and stay in a shack on the beach!

Starfish – our shack for 5 days 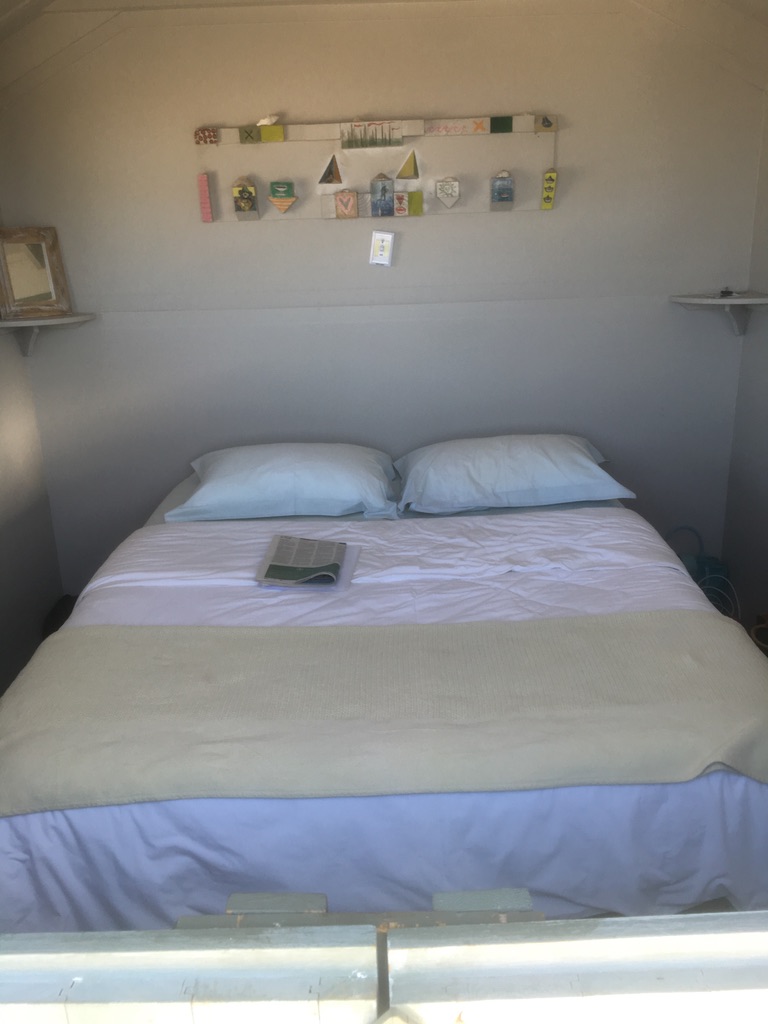 Beautiful decorated inside and a bed with luxurious linen

There are 10 shacks available, as well as tents (I think it might be 2 or 3). The tents are however not as we know it – they are built from wood, so no need to bother with tent pens in the gusty West Coast wind!

A tent at Sea Shack – no wind will blow this tent to pieces!

There are 4 ablution facilities, each with an eco-friendly loo, a basin and big shower. There is no electricity at Sea Shack – they are completely off the grid, but thanks to gas, we’ve always had a steamy hot shower.

It is solar powered and we’ve received a small solar lantern every evening to use in our shack. We’ve also brought a solar charger from home to charge a kindle, cell phone (if you wish) or tablet/note book for in case you need to do some work (but hopefully that won’t be necessary!) There are however also charging facilities in the communal area available should you need to make use of these. 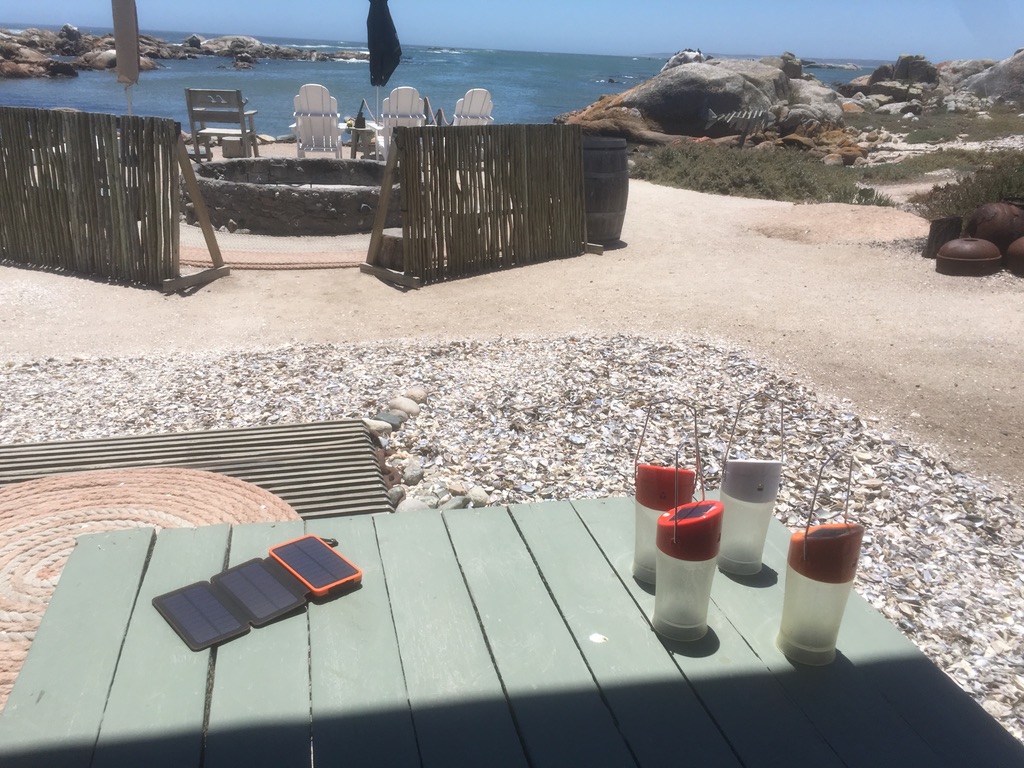 The solar lanterns are charged during the day in the sun to use in the evening. Our solar charger was also charged by the sun on a daily basis!

The communal area is situated next to the shacks and was a great place where we could spend time reading, preparing food or just sit and watch the sea with a glass of wine! 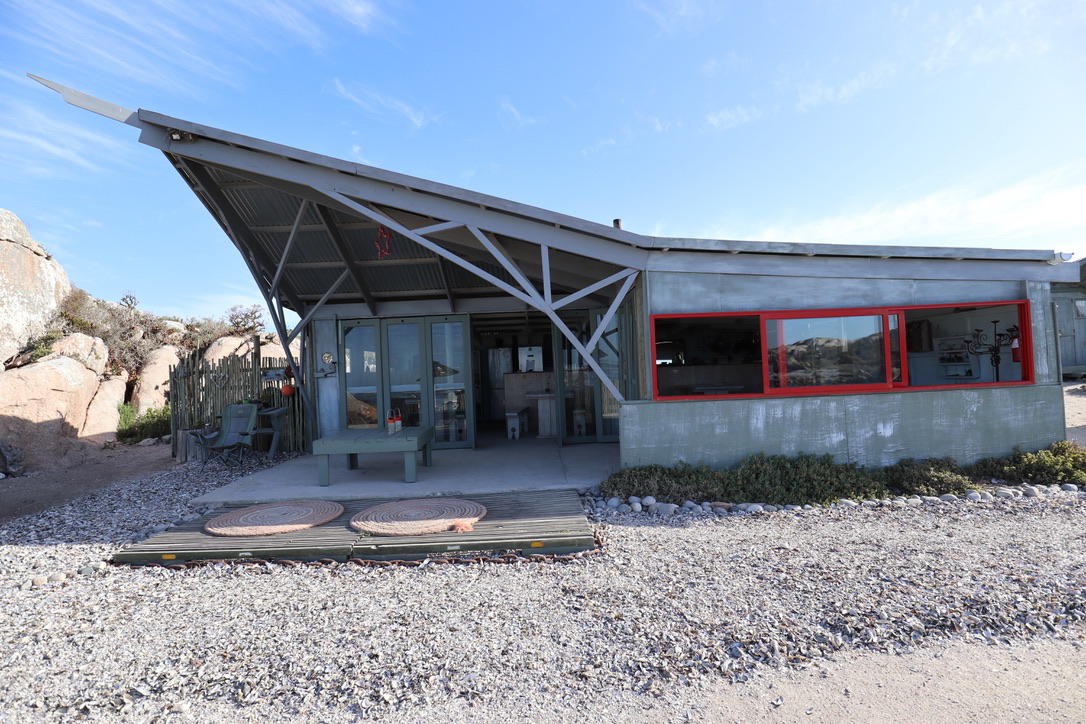 The communal area – a kitchen and dining room in one 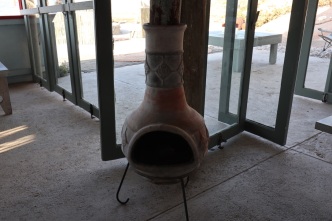 The inside of the communal area

There are 2 fridges in the communal area that we’ve shared with the other residents. It was nice to use the kettles on the gas stove to boil water for that first cup of coffee in the morning. There were no shortage of kitchen utensils and we could either prepare dinner inside the kitchen on the gas stoves or make use of the fire pit outside. Of course, we’ve sat around the fire every evening! 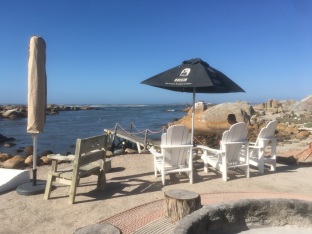 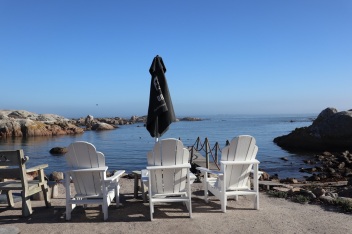 No pets are allowed at Sea Shack, but it was nice to meet their own dogs and I loved playing with them. Sisi (the older dog) was mostly just around the communal area, while Spice (the younger and more energetic one) has taken long walks with us.

We were warned on our arrival at Sea Shack about the “wild life” … like a scorpion in your shoe or the occasional snake. Fortunately, we did not meet any of these, but we’ve seen a lot of different birds. A keen bird lover, would love this place!

We’ve seen many birds close to our shack, as well as on our long walks along the coast

The only other “wild life” we’ve experienced, was a big lizard and a small mouse … nothing that was too scary 😀

Although Sea Shack is quite secluded, you can keep yourself busy with several activities. We’ve seen a couple of fishermen on the rocks and a few boats with local people (probably trying to catch crayfish). There’s even a labyrinth to calm your mind down (if the quietness of Sea Shack can’t do that) and great paths along the coast to take long (or short) walks. We’ve also had our kayaks there, but were just too lazy to take it off the car’s roof 😏. 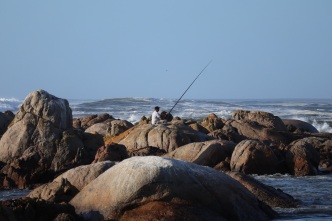 The labyrinth was fun to walk

But then, it was also not necessary to do anything while we’ve visited Sea Shack. To just relax was also a great “activity” and time away from the television, newspapers and phones are time well spend!

How about waking up with this view!

On the big white beach chair with something cold – that’s life!

Sitting on a rock and enjoying the sound of water has such a calming effect on me!

When it was too hot or too windy outside, we’ve moved inside to the communal area and read books we normally don’t have time for. But before we knew it, the books were set aside and we’ve stared at the sea!

The evenings next to the fire, was great! There is just something about a fire next to the ocean – must be the combined sound of water slowly rolling out on the beach and the crackling noise of wood on a fire … priceless! 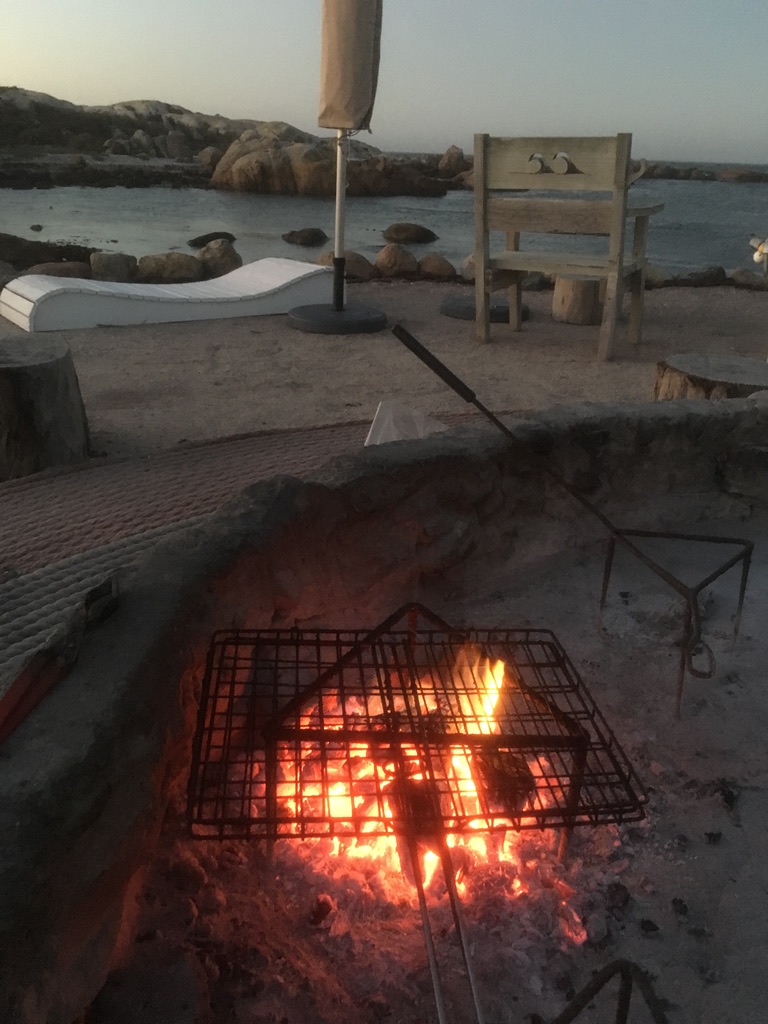 The very best of being outdoors – sitting next to a fire 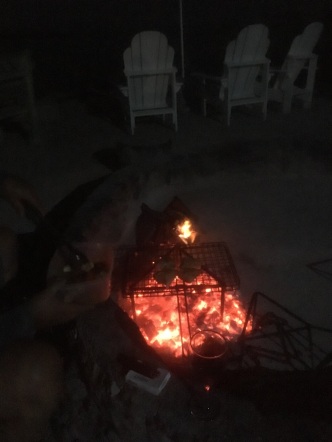 In Daniel, Sea Shack has a great host! He welcomed us on arrival and always made sure we were comfortable and didn’t need anything. He was ready to help us late at night when we’ve wanted to buy ice or more wood and greeted us every morning with a big smile. It was admirable to see how he walked around the beach to pick up litter and took left over food to feed the sea birds – what a great guy!

Daniel, the friendly host of Sea Shack. He always made us felt welcome and kept the surroundings perfectly clean and tidy

Our week at Sea Shack was pure bliss! We’ve met new people and heard wonderful stories around the fire. It’s a hidden gem on the West Coast and so worth a visit! If you are in need of a breakaway, don’t look further than this beautiful place! You can find them at Sea Shack should you want to make a booking. 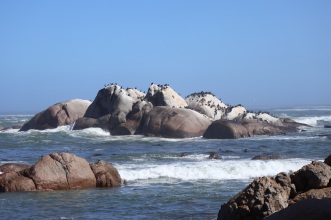 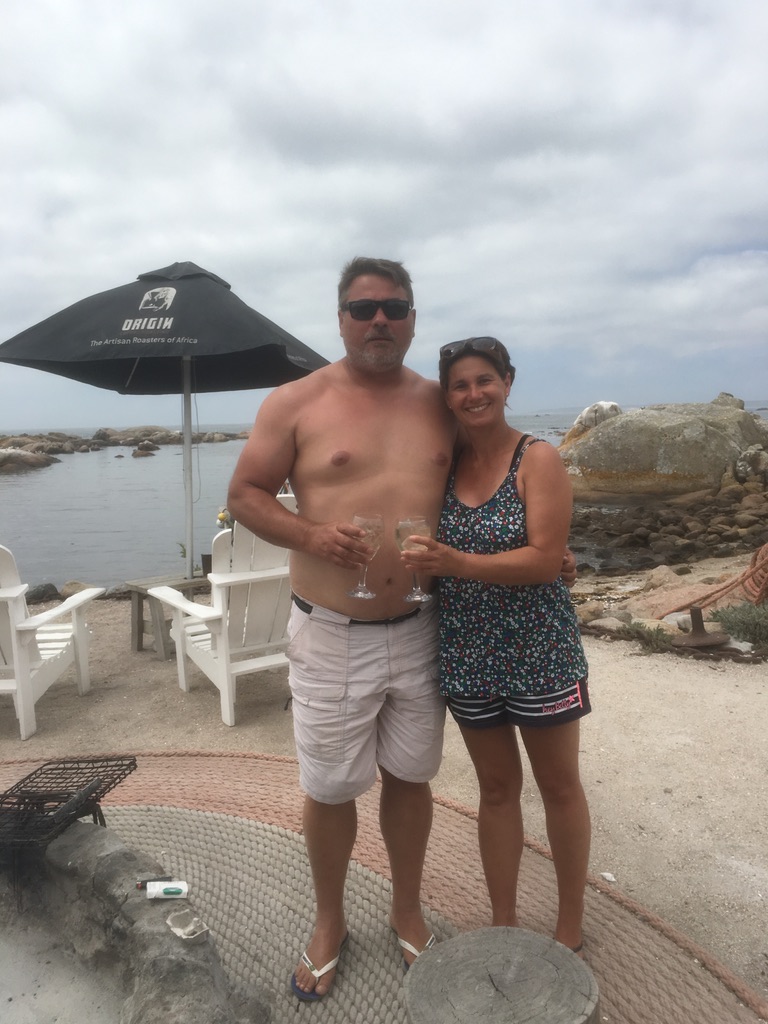 Relaxed and ready to embrace 2019