It was not that easy to rise and shine this morning! That 44km of yesterday kept us in bed until 7:00 … we knew that today’s stage is not a long one (that’s of course if we follow the right arrows 😊), so we took it easy.

It was great to walk in Spain once again, but with that we also became aware that our Camino will soon come to an end. We were excited to see Santiago again and will make the most of the next 5 or 6 days of hiking!

But first things first! We have walked to the first open café we could find and ordered “café con leche” with a piece of lemon cake (oh, how I missed the taste of Spanish lemon cake!)

We also got a small glass of freshly squeezed orange juice with our order … a good Vitamin C shot for a cold that was threatening us for a couple of days now (probably thanks to those days of walking in the rain).

The walk out of Tui:

And then we were ready for our walk … but first we had to navigate our way out of Tui – always a challenge in the bigger cities! After a couple of locals showed us in the right direction ☺️, we left the town behind.

Walking on the ancient Via Romana XIX

We saw a couple of pilgrims when we left Tui, but we were mostly on our own. It was so much different than our Camino Frances of last year – but no doubt, still a wonderful experience!

A bit of road walking:

Just after Capela da Virxe do Camino, we walked on the dedicated pilgrim track next to the A-55. Fortunately, there is a barrier between us and the road and the oncoming traffic did not bother us.

It must have been almost 2km that we had to continue walking next to the road before we found the turn off that took us into a wood.

We came across the Cruceiro San Telmo where the spot is marked with a cross. According to our Brierley guide book, it is here that San Telmo fell sick and died of a fever in 1251 on his way back from a pilgrimage to Santiago de Compostela.

Military guys … on the Camino?

While we were taking a moment at the cross, we heard noises behind us … it was a group of soldiers and they passed us quickly. We were wondering what they were up to … hopefully just training and nothing for us to worry about.

We did not see a lot of pilgrims today, but we did see a group of soldiers …

It was a really great day to be out and about – the sun was shining and we were surrounded by the beauty of nature.

As we walked into Ribadelouro, I once again noticed a bag of bread by the front gate of a house … we saw this so many times in Portugal … and I always smile upon seeing this – it boggles my mind that nobody even think of taking just one bread from the bag 😉.

We stopped at a café in Ribadelouro for a quick break … and knew we were back in Spain when there was Spanish potato tortilla on the menu!

We heard of some pilgrims that said the stage between Tui and Porrino was not such a scenic walk, but until now, we enjoyed the day. It might be that some detours were added in the meantime to avoid busy road ways and industrial areas.

More pathways through the woodlands

At a beautiful medieval stone bridge (puente Orbenlle) we paused for a moment to take photo’s.

Medieval stone bridge after the small hamlet of A Magdalena

Make sure you choose the scenic way:

And then we saw the reason why some pilgrims mentioned that it might not be such a lovely stage. After we left the woodlands behind, we saw the open cast mines of Porrino on the horizon – this might be the industrial area they were referring to.

But we know from our Brierley guide book that we will see a mural of the Portico de Gloria in front of us and that this will be the only waymark for the new scenic route in order to avoid the industrial area.

Not a yellow arrow, but the mural of the Portico de Gloria to indicate the new scenic route

With a steep uphill back into the woodland, we were now following the new scenic route

And it was a beautiful scenic route. At first, we did not see any yellow arrows and were hoping we are going on the right paths. But then, suddenly, yellow arrows appeared literally around every corner as we walked through the country lanes. 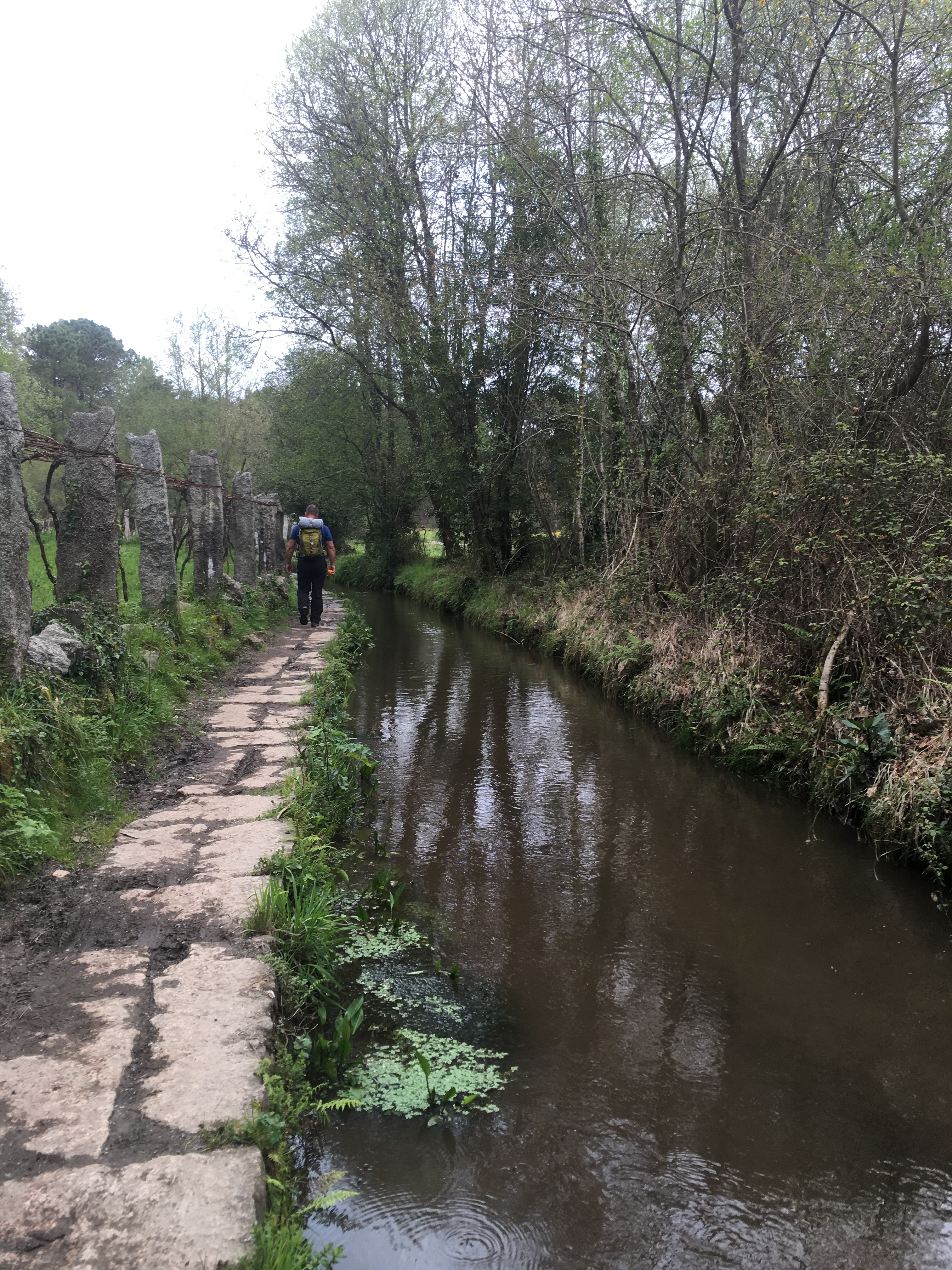 Beautiful new scenic route on our way to Porrino

We did not see any other pilgrims (or the soldiers of earlier) and hoped we were still on track … at least, the yellow arrows gave us peace of mind!

A horse in a piece of grassland on our scenic route

For the last 3km to Porrino, we kept our eyes on the arrows – there were a couple of different options and we wanted to make sure we stay on track (that 44km of yesterday is not forgotten yet 😬).

In Capilla San Campio we saw a woman busy feeding the pigs in the front yard. They were so adorable and I took a couple of photo’s … I suddenly remembered that night in Mealhada in Portugal where we had that pig dish … maybe I will not eat pig for a while …

Pigs in the front yard in Capilla San Campio

And then we walked into Porrino. It’s not a big town (about 18,500 residents) and there are a few beautiful buildings.

We arrived in Porrino just after lunch time – a short day comparing to yesterday!

We booked into Sendasur Albergue. Once again, another beautiful albergue and fairly new it seems. We got our bunk beds – this time with a curtain that gives you more privacy with your own little reading light above your bed. A really nice albergue with very friendly staff. 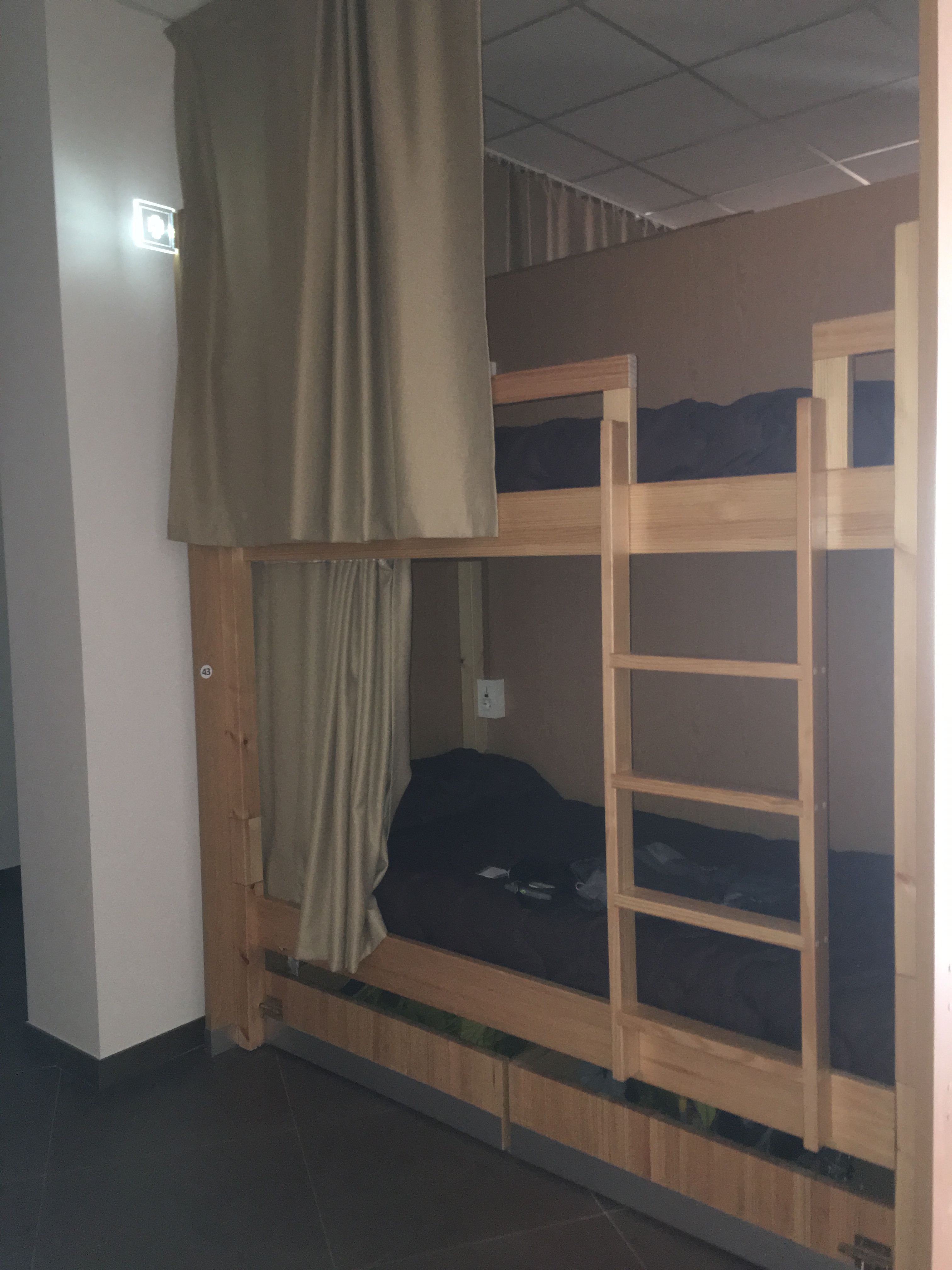 Our bunk beds in Sendasur Albergue 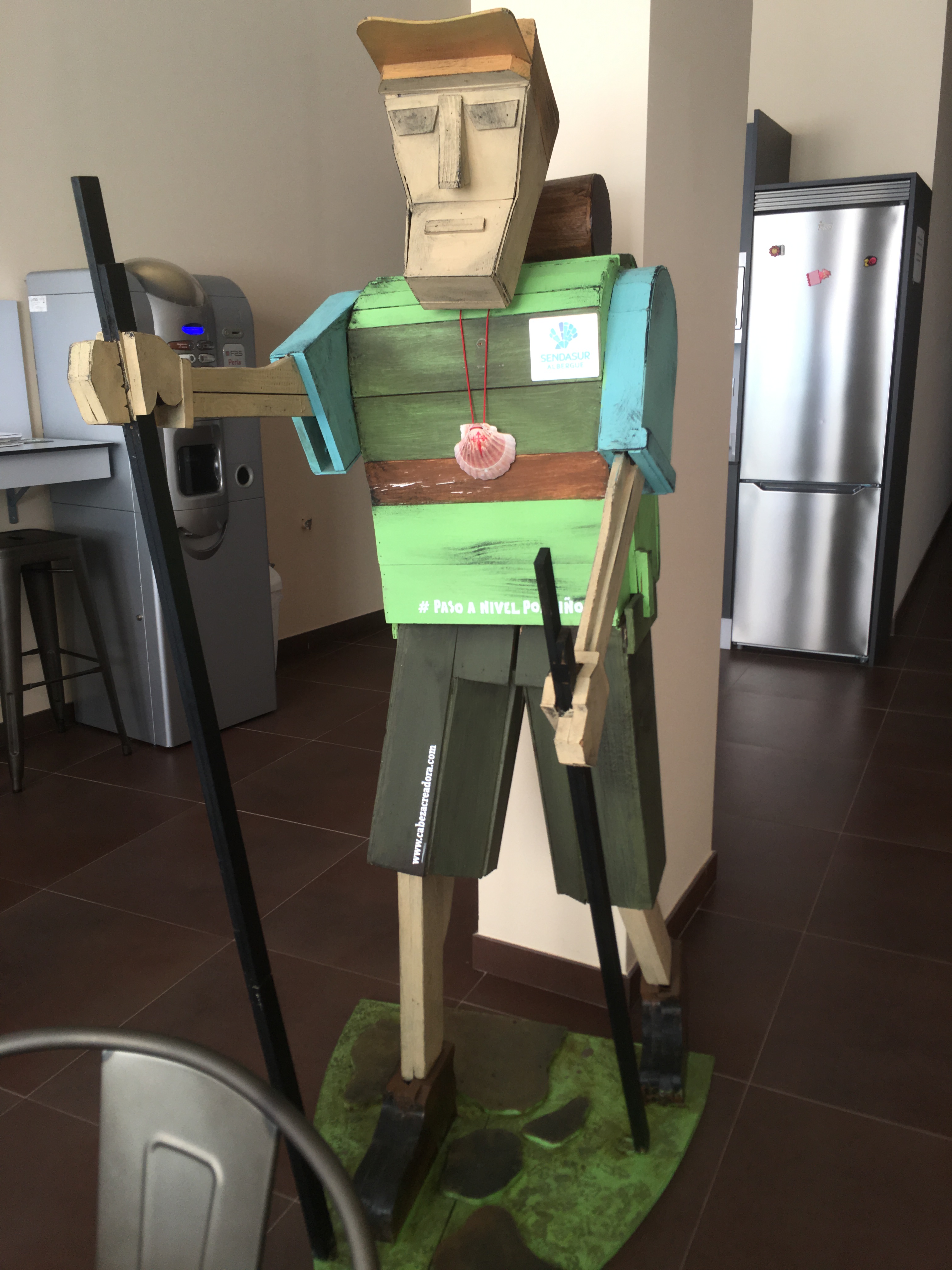 A wooden pilgrim in the communal area of Sendasur Albergue

After our laundry was done, it was still early enough to go out for lunch. We noticed a couple of pilgrims in the town centre and when we got back to our albergue, two pilgrims from France also checked in. It was nice to share our dorm with other pilgrims.

We also had dinner at a small café later that evening and I decided to end it off with hot chocolate. The hot chocolate that are served back in South Africa is a little thicker than coffee, but the hot chocolate that I had here in Porrino was almost a chocolate syrup – yummy! And it was served with a lollipop … or as we say in Afrikaans, a “stokkielekker” – such a beautiful word and literally means “a sweet on a stick” 😋.

My thick hot chocolate and “stokkielekker”

How to communicate (when you don’t speak the language):

Back at our albergue, we were sitting in the communal area for a while and talked about our day … the one French guy was listening to us and later asked from which country we were. He could not place our language (Afrikaans) and at first thought we were from the Netherlands. He could speak a few sentences in English and we could at least talk about our Camino and a little bit about our country’s rugby teams. I sometimes wish I could speak other languages in order to better communicate with pilgrims!

But it is also true that you don’t have to speak the same language when you want to have a conversation about the Camino ☺️.

It was a great day on the Camino and one we thoroughly enjoyed!