The following information is found in our Brierley guide book:

“There are 2 different options, as well as an alternative route that can be taken from Porto:

The phrase “finding your way” sounded really exciting! We therefore decided to take the Senda Litoral 😄. We both love the sea and could not wait to walk alongside the coast of Portugal.

The good news: The sun was shining! There might be some rain later, but we were hoping to walk in dry weather today.

We’ve decided not to take the metro back to the Cathedral (where most pilgrims start their journey when walking from Porto), but instead start walking directly from our hostel. This meant we’ve had to take the longest street in Porto, Boavista Avenue, to the sea side. This street is 5.5km long and is quite busy in the early morning with people leaving for work and parents dropping off their children at school … we’ve had to carefully negotiate our way through the traffic, but at least there was the prospect of walking next to the ocean for the rest of the day!

When we’ve reached the ocean, we were almost at Matosinhos. It became a bit overcast and was cold, but it was not raining yet. The pavement was quite hard under our feet and we could not wait to get to the promised boardwalks. 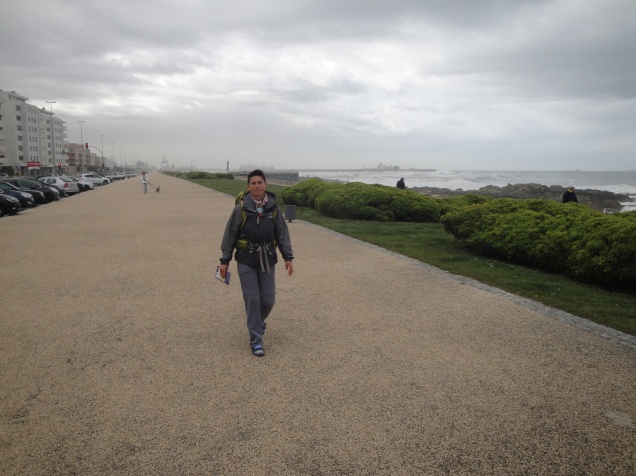 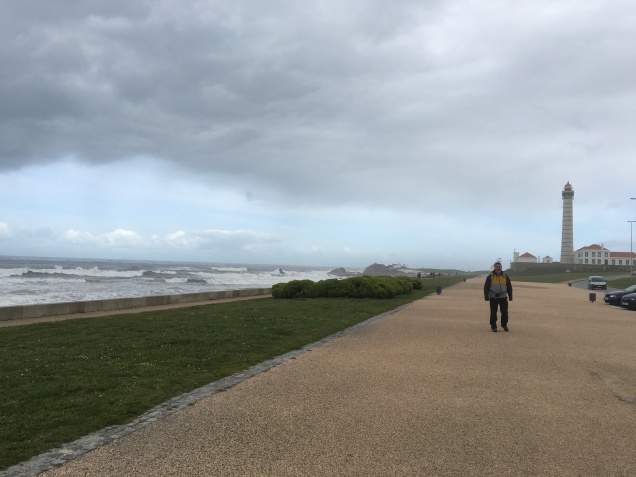 We have now officially left Porto. The wooden boardwalk was a relief to walk on after the hard pavement out of Porto. It was also great for the blisters under my feet! 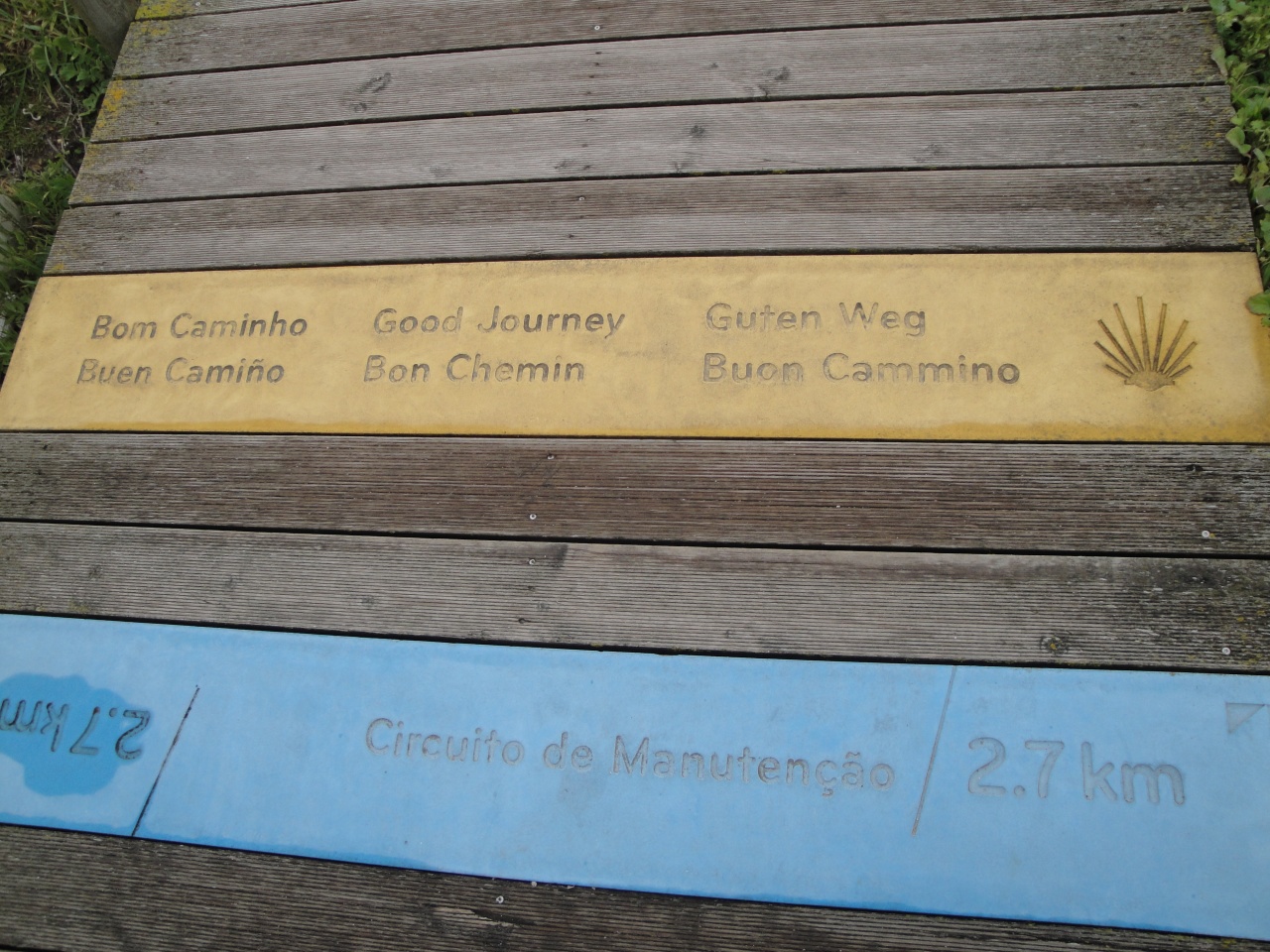 No doubt, we are on the Camino and what a way to welcome us!

The view from the coastal route, was just splendid! I could take photo’s of the sea all day long – it always looks different. 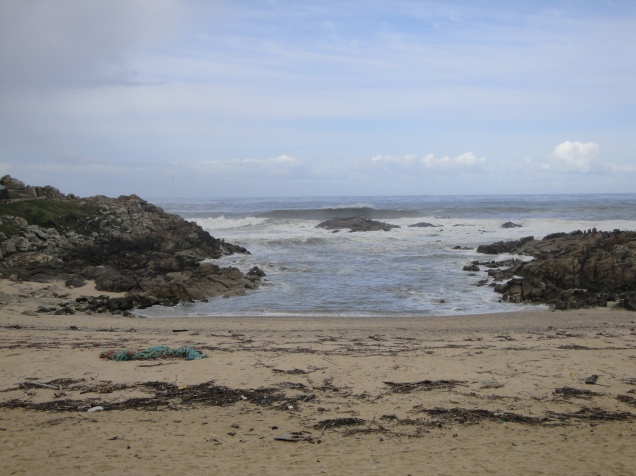 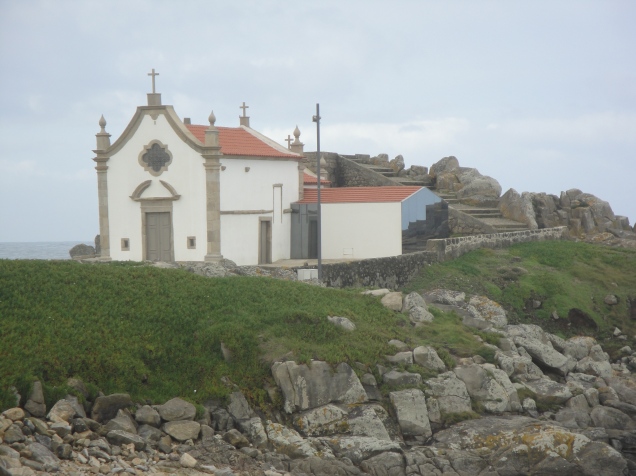 The views were amazing

In Capela we found a small café on the beach where we’ve stopped for coffee. There were two pilgrims in the café – it was great to see other people on the Camino. Because there are different routes from Porto, we were not sure if and how many pilgrims we’ll see. 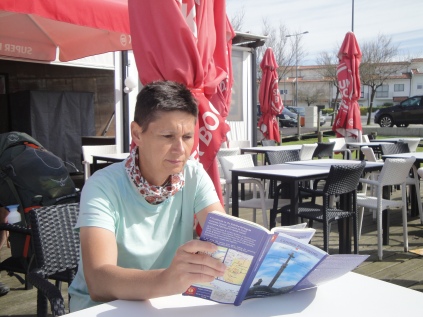 The boardwalks was such a pleasure to walk on! The Portuguese government probably spent quite some money on this, but it was definitely a great investment! 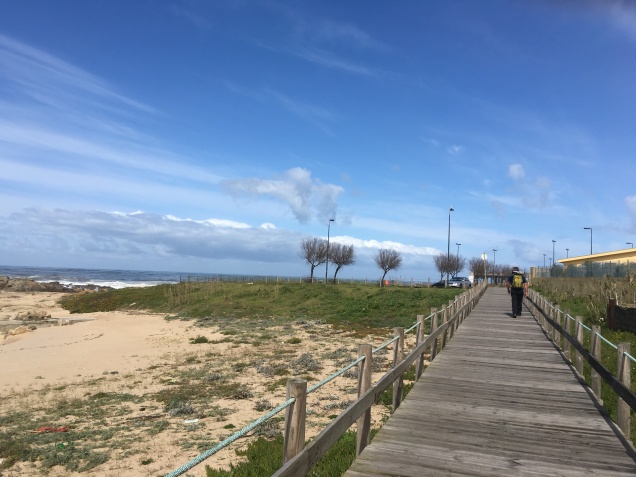 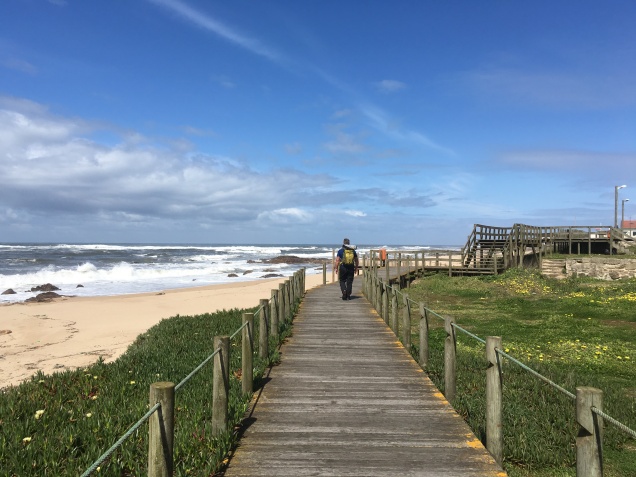 “Under the boardwalk, down by the sea” … this song from The Drifters got stuck in my head as we’ve continued on the lovely boardwalks! 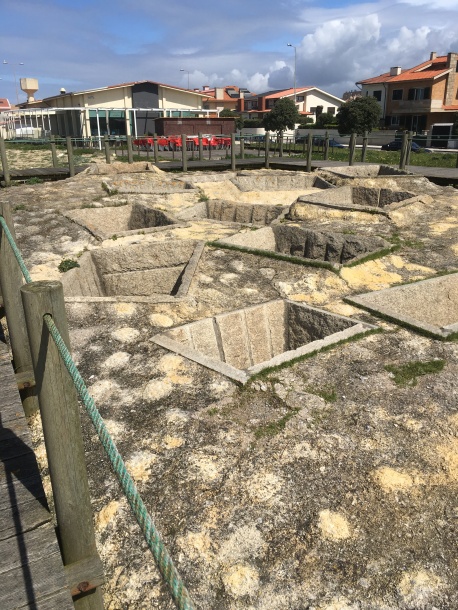 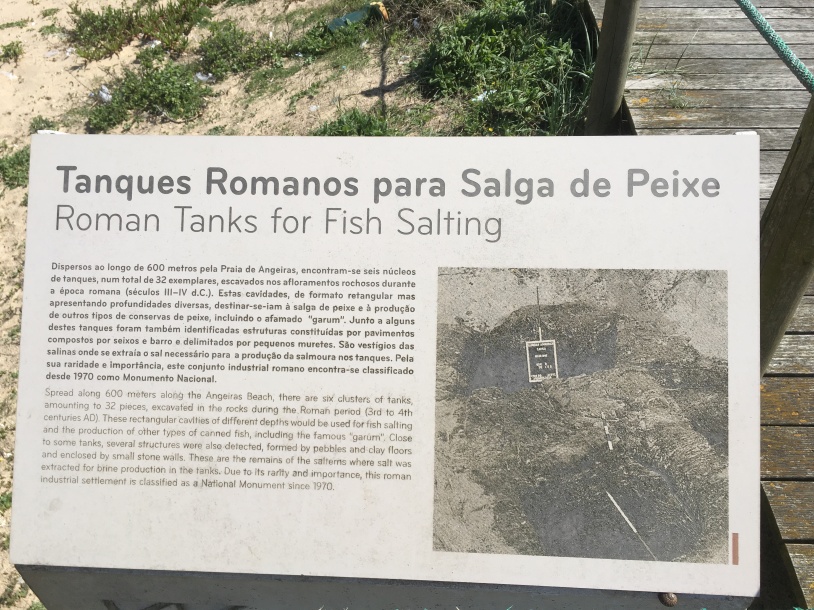 We’ve also walked through the traditional stone fisherman’s houses “Casas do Mar de Angeiras”. Fishermen were busy working on their nets and it felt like such a peaceful place to be at. 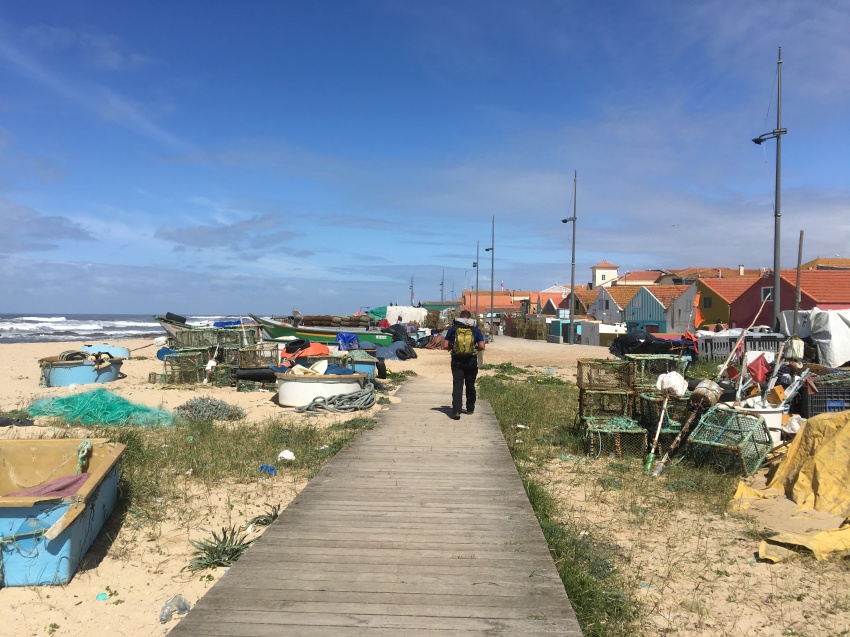 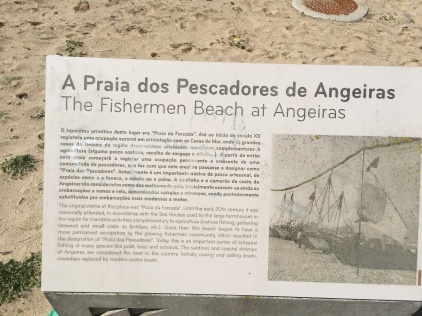 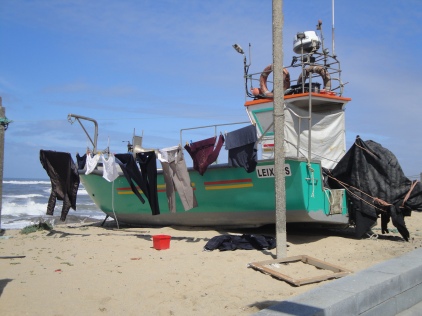 The sun was now shining and it became a lovely day alongside the sea. We were fortunate to have this weather while walking the Coastal route. We’ve taken the wooden bridge over the rio Onda which separates the town parishes of Lavra from Labruge. 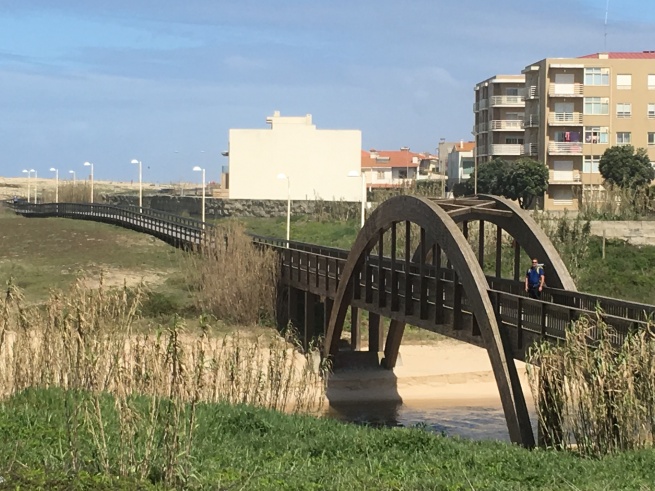 The wooden bridge over the rio Onda 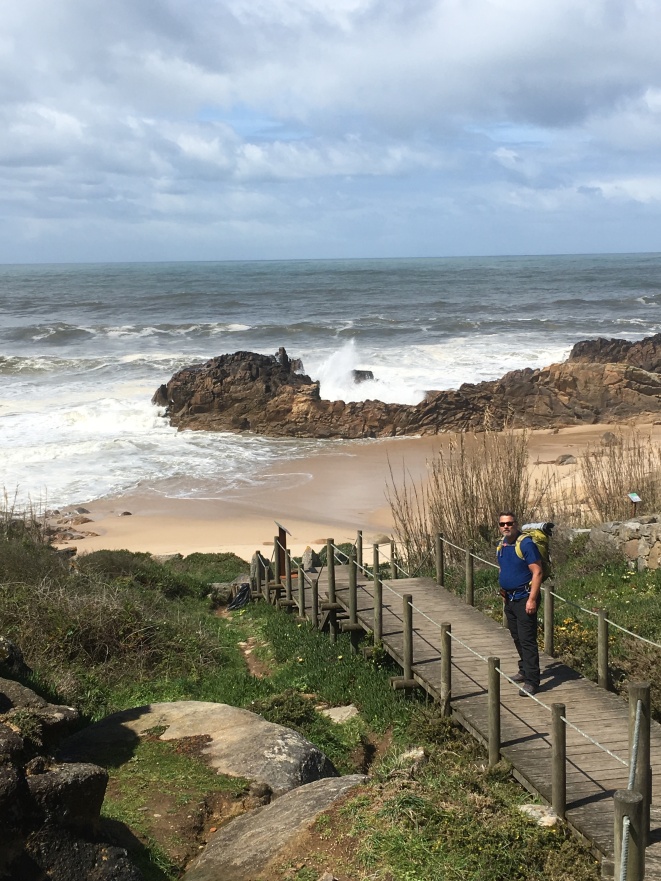 On our way to Labruge – a favourite overnight stop for pilgrims

At the entrance of the town Labruge, we’ve decided to have lunch next to the ocean. We’ve found wooden benches and rest for a while, overlooking the ocean. 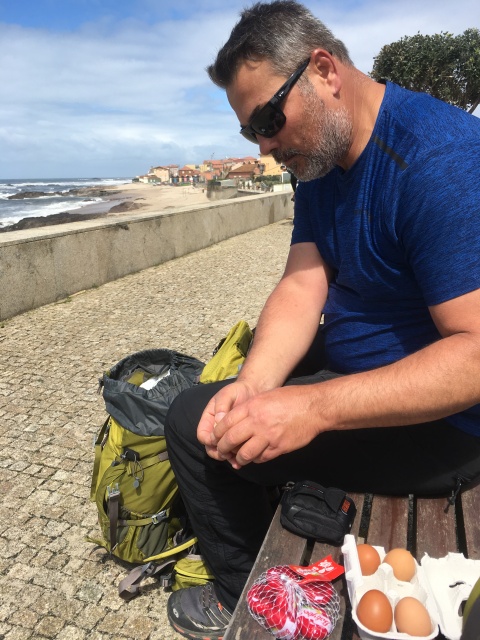 Lunch time – hard boiled eggs and cheese. As a pilgrim, you are always happy with whatever food is coming from your backpack!

And then, either due to our full stomachs or inattentiveness to the Camino signs, we’ve lost our pathway. As we were trying to establish where to go, a couple of pilgrims came from the front. They’ve told us that the road we were on, were leading into a mud swamp and that we should turn around.

A German pilgrim (unfortunately we cannot remember his name), walked with us for the last 7km to Vila do Conde. He was such a friendly guy and between him, his GPS application and our map, we could establish the correct route again. 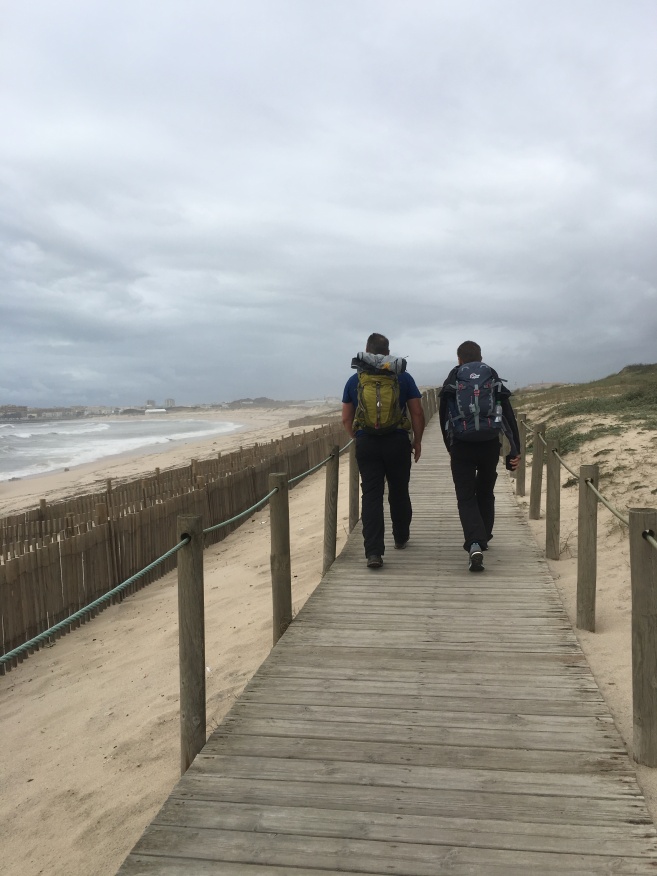 I did struggle a bit during the last few kilometres, but realised I just had to walk through the pain that are caused by my blisters. There was no way that I would stop now! I was also concerned about the dark clouds that were gathering in the sky and were beyond excited when we’ve reached Vila do Conde without getting wet! 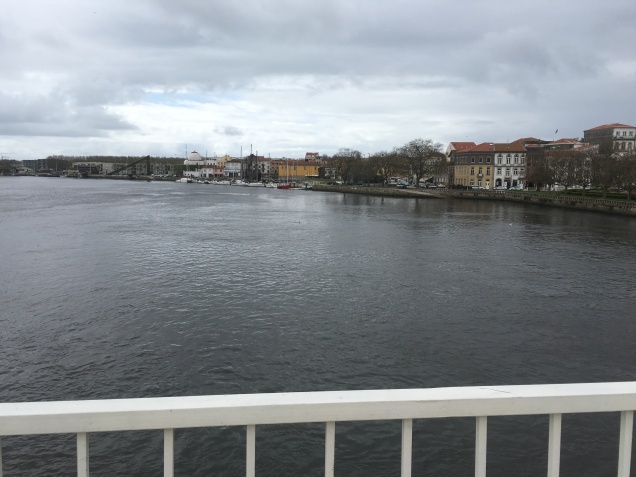 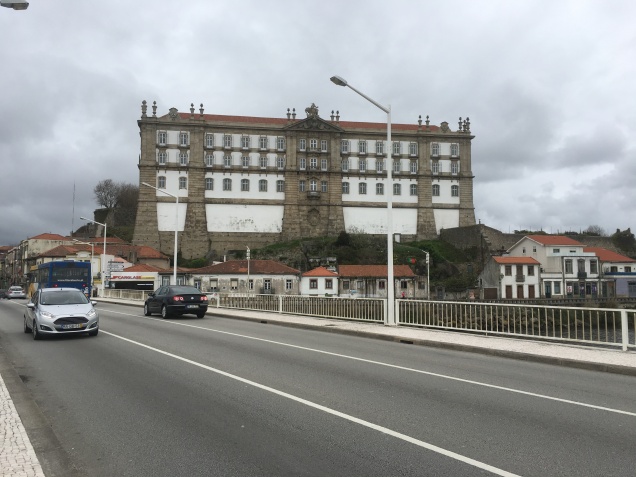 We cross the bridge over the estuary of the Rio Ave into Vila do Conde. The Igreja e Mosteiro de Santa Clara is at the end of the bridge

Our German pilgrim had limited time to complete his Camino and decided to walk further to the next town. We’ve greeted him as he turned right and we’ve turned left after the bridge to our hostel, Bellamar Hostel. 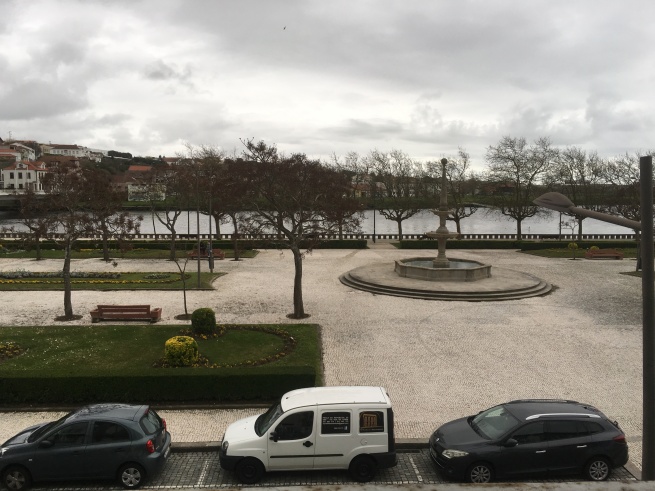 And as expected, it started to rain. We were really glad to have reached Vila do Conde before the rain came down. We’ve walked to the café next to our hostel where we had a well-deserved beer. 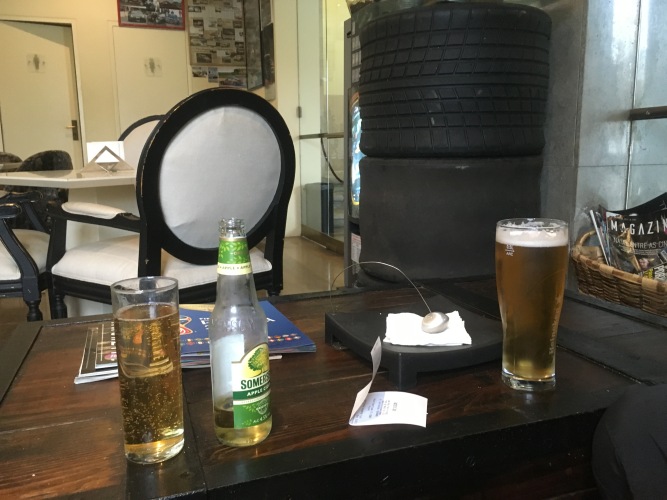 A beer in a bar with the locals are always a bonus after a long day’s walk!

It was a long day on my feet, but I’m glad I’ve managed to walk all the way. This is hopefully an indication that I will be able to continue all the way to Santiago.

I must say, the beautiful views alongside the ocean, made a difference to my frame of mind today. The sea always has a calming effect on me and watching all the beauty around me, definitely took my thoughts away from my blistered feet.

I can’t wait to walk on more of these beautiful roads!