The last day of our Camino … this is just an incredible thought!

Some days we were looking forward to this day and other days, we’ve wished we could just walk forever on these beautiful roads.

We’ve got up very early as Carl told us that, if we want to attend the pilgrim mass in the cathedral in Santiago at 12 noon, we’ll have to start walking before sunrise.

For the last time, we’ve rolled up our sleeping bags and sling our backpacks over our shoulders … this routine will, for some obscure reason, be missed in the coming days and weeks.

By pure willpower I’ve managed to put my blistered feet into my hiking sandals and just took one step at a time … Santiago was waiting for me!

We’ve had to use our torches when we’ve left O Pedrouzo as it was still dark. There was something majestic about walking in the dark through the eucalyptus forest … you hear nothing, but footsteps and only see shadows in the dark. Berto and John took the lead as Carl, the ever gentleman, stayed with me. Every now and then he would just asked whether I’m still ok … it was a blessing to walk this last day with them!

We did not take many photo’s on the last day of walking … it was a day where you’ve just absorb the feeling of achieving something very special.

I think it was in Amenal Tunel that we’ve stopped at a café for café con leche … I did not really concentrate on the towns we’ve walked through as I was only managing my blistered feet – one step at a time!

The ever-present yellow arrow of the Camino

We were walking literally next to the airport of Santiago … we will come back to this airport in a couple of days (but this time with a taxi and not by foot). 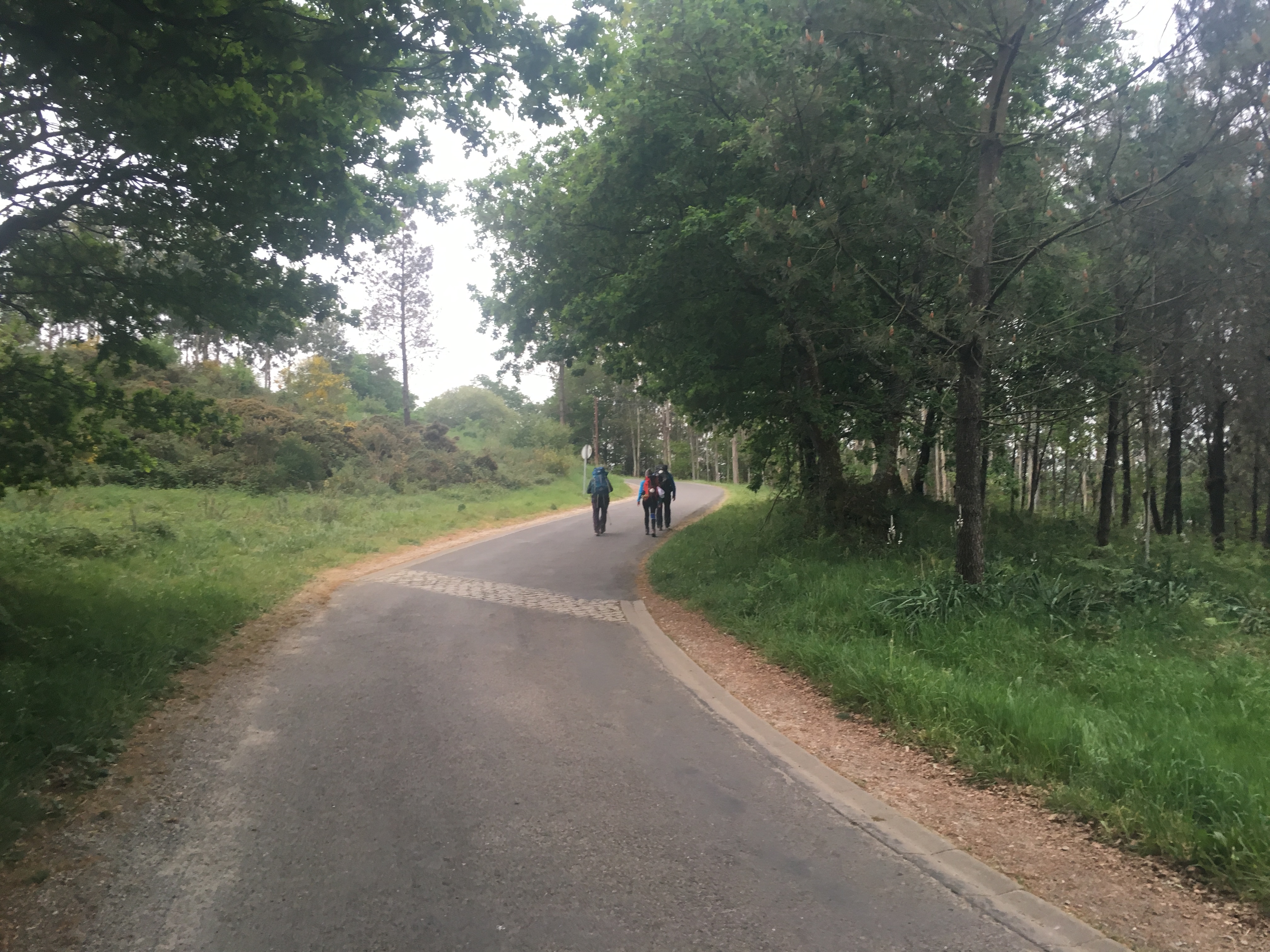 Berto and John (and another unknown pilgrim) in the distance. From here it was only 11km to go to Santiago de Compostela

It was a cloudy day – perfect weather for walking! Carl told me about the walk into Santiago and how he was looking forward seeing the cathedral once again. I cannot remember how many times he walked the Camino – must be 5 times or more – but he said every time he walks into Santiago; the same feeling of pure joy surprises him. He said one can never takes this journey for granted and that he has special memories for each of his Camino trips. I do hope that this will be the case for me as well.

As we’ve got closer to Santiago, it started to become busier. Pilgrims were walking in front and behind us and some towns entertained us with live music … all contributing to a festive atmosphere.

Typical Galician music entertainers met us on our way to Santiago

We’ve walked past a couple of monuments and statues celebrating the pilgrim and the Camino. Carl showed us at Villamaior to the high point, Mount Joy Monte do Gozo, from where medieval pilgrims could first see the towers of the cathedral. We could see big groups of pilgrims walking towards that point, but we’ve decided to keep walking to Santiago … we will see the towers when we’re in front of the cathedral!

As we’ve entered the modern part of Santiago, we’ve seen a couple of people that were helping a woman to get her car out of a ditch. They seemed to struggle and Berto, Carl and John walked over to try and assist. With the men behind the car – lifting and pushing – they got the car out of the ditch and the woman waved and drove off. I wished that I took a photo of this – after walking over 700km, they still had the Camino spirit of helping other people!

It almost felt like we were walking another 10km to get to the old city (but was probably only 1km). The modern part of the city was busy with constant traffic – it could be distracting to the feeling of anticipation to get to the cathedral – but once you’ve entered the old city, the reality of arriving at Santiago becomes real!

When we’ve got close to the cathedral, we could hear music coming from a bagpipe. This add to the feeling of excitement as we’ve walked passed the bagpiper through the tunnel and then … there in front of us was the beautiful cathedral of Santiago in its full glory!

Although the facade of the Santiago Cathedral was covered with scaffolding (due to renovations), it was still a beautiful sight

For the first time I had no words … I’ve just started to cry! Uncontrollable tears of relief, accomplishment and joy – it almost felt unreal that we were standing in front of this wonderful building. Me and Berto hugged each other and just embraced the moment. I will never, as long as I live, forget this moment! 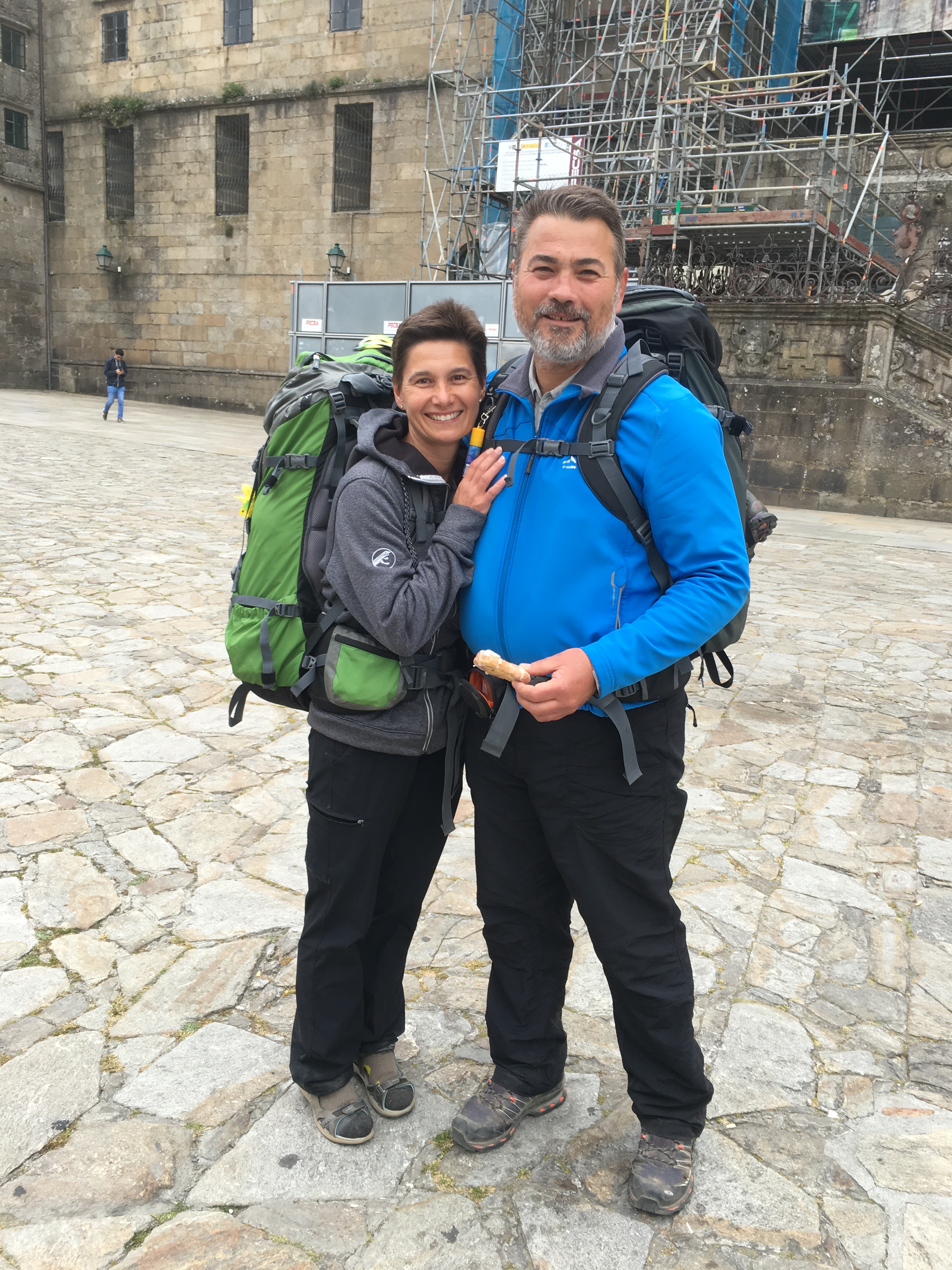 We’ve arrived! Overwhelmed, but so happy!

Carl and John – friends we will never forget!

Everywhere were pilgrims sitting, standing or lying on the ground. We’ve seen many familiar faces and greeted our pilgrim friends. It was a time to cherish and keep in your heart forever.

Carl took us to the Pilgrim House where we could store our backpacks for a while. They are such a great bunch of people – friendly and helpful – and listened to all our stories (they probably hear these stories a 100-times a day, but they still listened and shared in our joy).

It was almost 11:30 when we took the steps inside the cathedral for the daily pilgrim mass. The inside is beautiful and we’ve found seats close to the front. Pilgrims were still streaming in just before 12:00 and some had to stand against the walls. 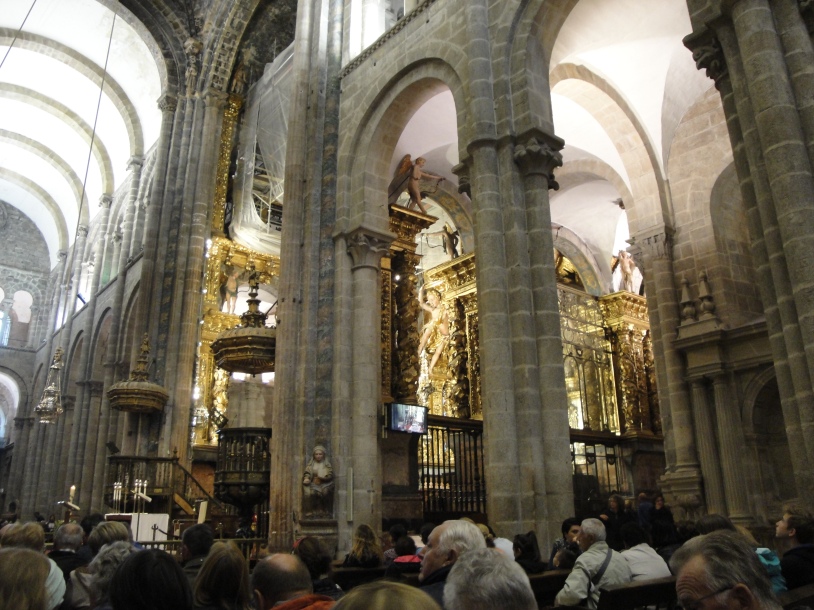 The inside of the Santiago Cathedral

Although the service was in Italian/Spanish, and we did not fully understand the Catholic way, we could take the time to find some quietness and reflect on our journey. I was so grateful to our Father in Heaven that we could undertook this walk and that we’ve arrived safe and healthy in Santiago … I really felt blessed to sit here after almost 5 weeks of walking through beautiful landscapes and meeting wonderful people.

As we’ve walked out, it started to rain and we had to rush back to the Pilgrim House to get our bags (and rain jackets). I thought for a brief moment that the rain was a sign of blessing on our journey.

We’ve found the storage facility of Ivar close to the Pilgrim House. This is a very nice service we’ve read about before we’ve embarked on our journey. Back in Pamplona we’ve posted a box with unnecessary items to Ivar in Santiago and we were excited to find our jeans and t-shirts (other than walking apparel 😁).

We’ve booked a room in the Lux Santiago Hotel, just outside the old city. I’ve almost cried again when I saw the room … a real bed with soft linen and our own bathroom! Like Carl said: Never take anything for granted!

Our own room in the Lux Santiago Hotel!

After a nice and hot shower, we’ve put our jeans on and walked to the Pilgrim Office to get our Compostelas (pilgrim certificates). There was a bit of a queue, but after about half an hour, we’ve received our official Compostelas certifying that we’ve walked 729km!

Once we’ve received our Compostelas, we’ve explored the old city and found Carl and John in one of the bars. We’ve spent some time with them and Carl told us that he was already planning his next Camino. Our “Three wise men” also walked in and it was a fun time with everyone.

We were not sure whether we will undertake another Camino again and just wanted to enjoy this moment … but never say never! For now, I think it’s safe to say that I want my feet to rest and that this might take some time!

The “Three wise men” from USA/Korea 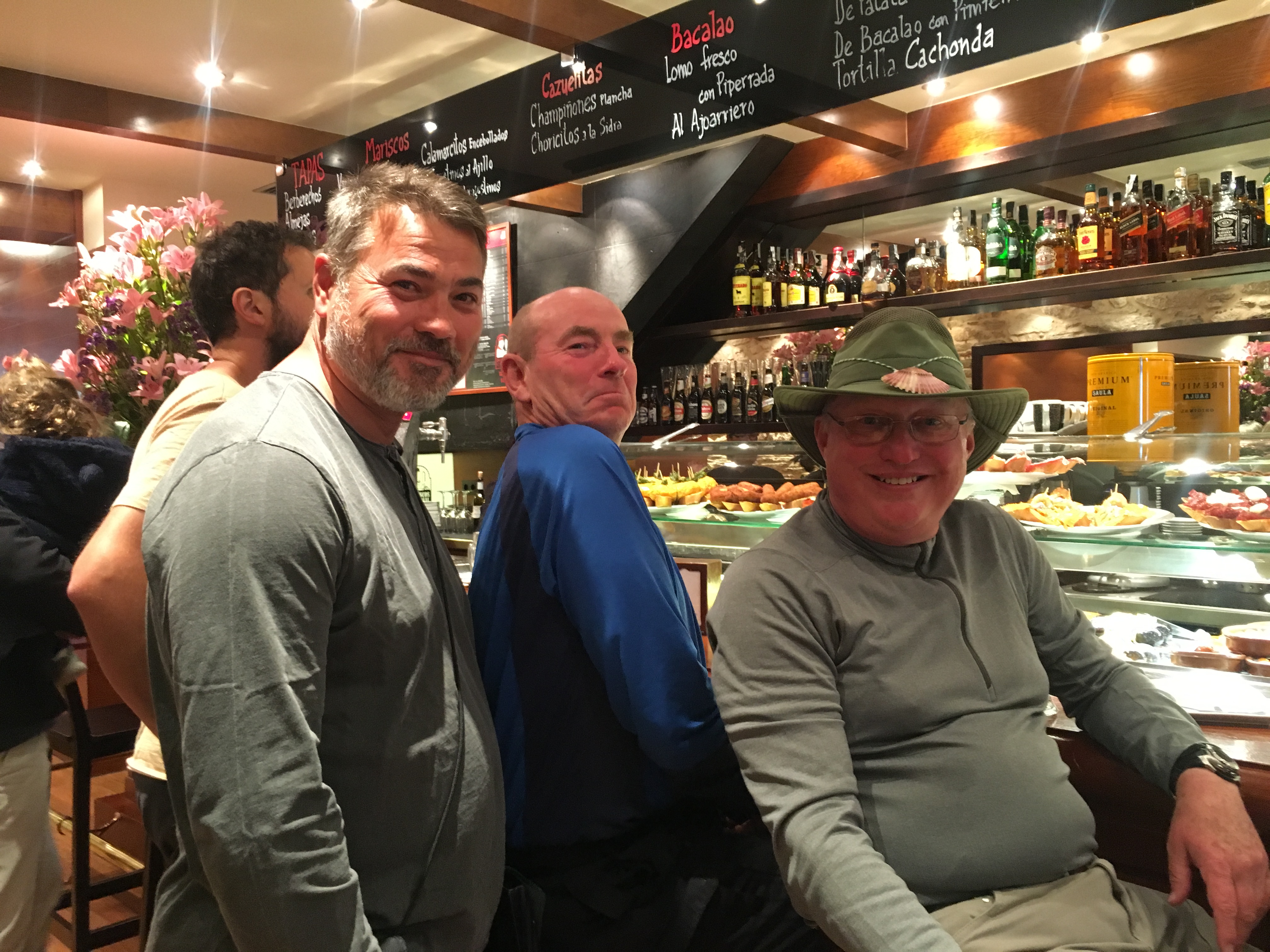 Me and Berto found a restaurant later that evening where the two of us could celebrate our arrival in Santiago.

A massive thank you to my amazing husband:

I’ve felt extremely blessed to have done this with my husband – he never once complained when he had to wait for me (or had to carry my boots for 680km and even sometimes my backpack). If I ever walk the Camino again, it would be on the condition that Berto must be by my side! He is such an inspiration and motivator that, for me, everything always seems possible.

We’ve celebrated with a nice bottle of red wine and one very big steak – definitely not a pilgrim menu, but worth every cent!

We’ve slept like there were no tomorrow! After we’ve had breakfast, we took a stroll through the old city and spent some more time exploring all the beautiful old streets and shops. We’ve also found a café that made the most delicious churros (this time with thick chocholate sauce)!

Later that afternoon, we’ve hooked up with Carl again. John already left for his home country, Ireland. And then, to our surprise, Monica (our dear friend from Sweden) contacted us and said she also arrived in Santiago. We’ve spent the rest of the afternoon celebrating our reunion. 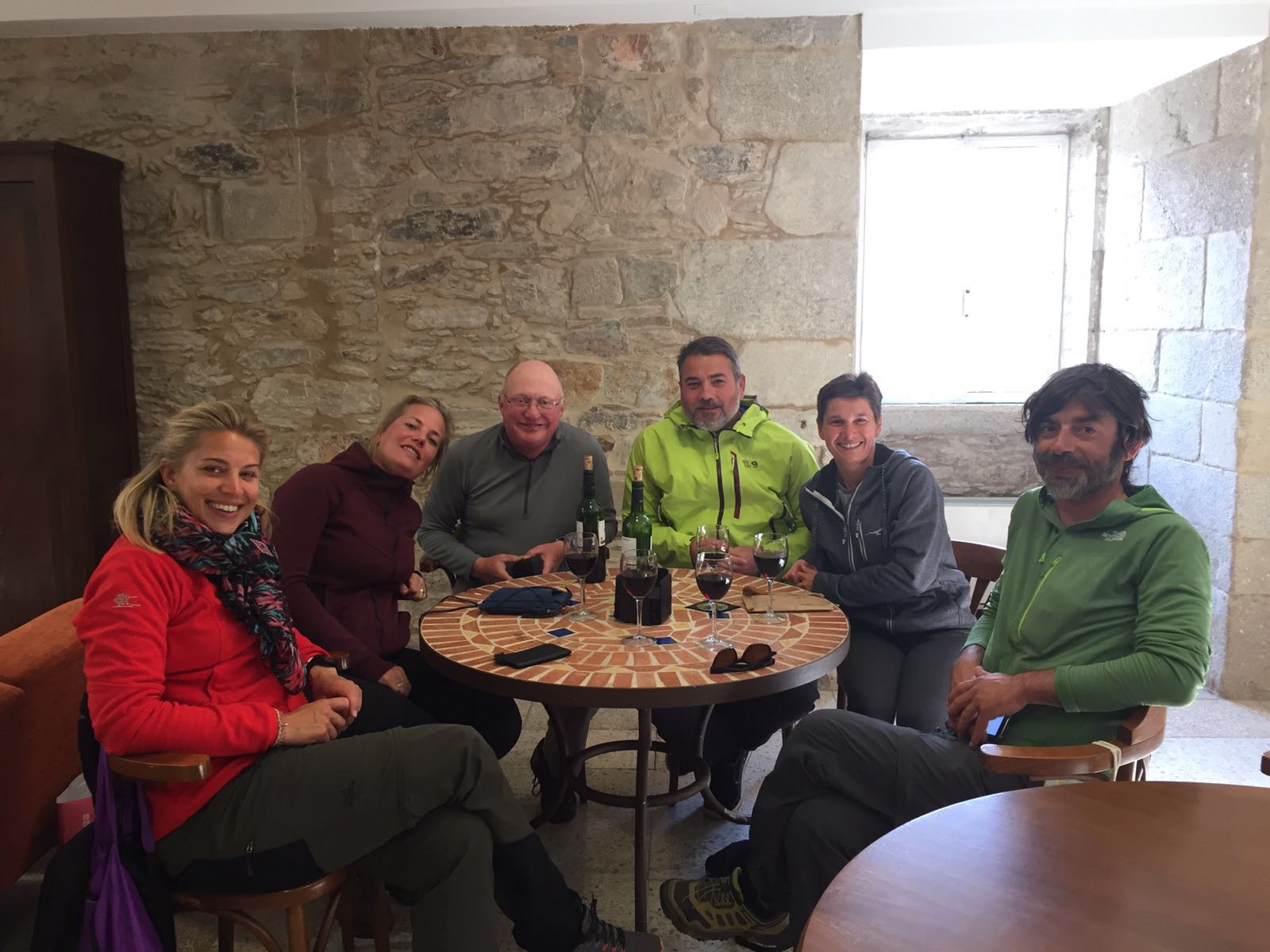 Monica, Carl, me and Berto joined by other pilgrims – all celebrating our arrival in Santiago

We’ve spent another day in Santiago, before we’ve said our goodbyes to everyone.

We’ve planned to fly to Madrid and spent another day or two there before flying back to South Africa. We actually did not feel like doing any more “tourist stuff” … our goal was to complete the Camino and now we were ready to go back home.

… This journey will definitely change your life as you’ve always known it. Get your backpack out and walk the Camino … we promise you, you won’t regret it …