We had a very good night’s sleep. Normally, in previous albergues, the windows were all closed and central heating was switched on. But since it was only the two of us in the room, the window was open during the night and we had lovely fresh air.

We decided to leave early this morning. We are aware that many pilgrims will start their Camino from Sarria today. Because of this, we are not sure how available accommodation will be in Portomarin (the next big town on the Camino route). And, I must admit, we also wanted to avoid big groups of pilgrims on the road if possible … after 3 weeks of solitude on the way, we were trying to see for how long we can keep it like this.

Up and about to see yet another beautiful sunrise

The first part of today’s journey was through ancient woodlands

It promised to be another fine day, but in the early morning, there were still some mist around which meant we had to keep our jackets and gloves on

When the sun came out, we took off our jackets and gloves. I’m so glad we packed it in our backpacks because it really helped on those cold mornings on our Camino!

Since yesterday, I became aware of ‘something’ in my left hiking sandal’s sole that was bothering me. I inspected my shoe last night, but could not find anything. However, today it’s worse and I am worried that my sandals were at the end of their life time!

An adorable donkey on the way

We walked through small hamlets and saw more and more pilgrims. We were however still walking on our own and ironically the appearance of more pilgrims did not really bothered us.

We passed many streams, and the high trees along the way ensured that we were most of the time protected against the sun.

One of the many streams we saw on our way 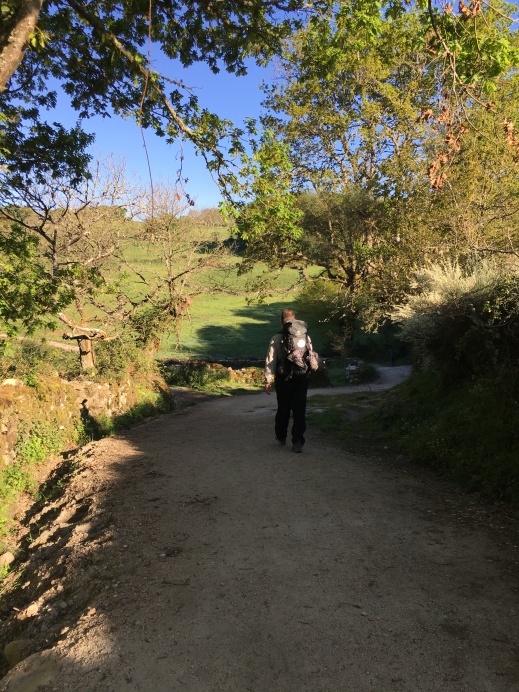 Walking in the shade of big old trees

We knew, somewhere on today’s stage, we would reach the ‘100km-to-go’. We were on the lookout for this and actually saw two concrete markers about a kilometer from each other indicating the 100km mark. We took photos at both these markers, just to make sure we don’t miss this important milestone!

100km to Santiago. One of the ‘Three wise men’ took this photo

And then, about 10km into our walk, my left foot became very uncomfortable in my sandal. I stopped and took my hiking sandals off. I could clearly see a crack appearing on the inside which made a bubble right underneath my foot! I took a Compeed plaster (yes, those you use for blisters) to repair my sandal’s sole … but 2km later, I had to stop again and add another Compeed plaster. Desperate times call for desperate measures!!

Finally, after 650km, my sandals just had enough of this journey and I couldn’t walk in them anymore! For the first time in my 45 years I wore a pair of shoes until they fell apart! The question was what to wear now! It was another 8km to Portomarin and although ancient pilgrims sometimes walked barefoot, I didn’t foresee that as an option! I took my boots from Berto’s backpack and struggled them on, but after 500m I had to stop again and take them off. The blisters that were healing did not react well with my boots on.

Now what? My last option was to get my flip flops out. Normally, these are very comfortable to wear, but to walk 8km with them while carrying a heavy backpack, could prove to be a challenge! At first it was nice for my toes to have some freedom to move around, but towards the end of the walk it became an absolute nightmare! I can honestly say, I was more than relieved when we walked over the bridge into Portomarin!

The bridge over the Mino River to Portomarin

The staircase leads up to this arch, which along with several other historic monuments, were all removed to the high ground around Portomarin when the dam was built in 1962

We walked to Albergue Ultreia to stay there for the night. It is a private hostel and very neat. The friendly ‘hospitaleros’ said we could bring our laundry to her and that she would take care of it – how kind of her!

My first question to her was about a shop that might sell shoes. She told us that there was only one in the center of town. With high hopes, we immediately took off to the shoe shop … and to my surprise, I found sandals that were almost the same as the one’s I had! They fitted well, but I suspected there might be the possibility of new blisters.

The old and the new

We enjoyed lunch in one of the restaurants next to the Romanesque church of San Nicolas. When we went back to the albergue, the ‘hospitaleros’ was so kind to hang our clothes on the washing line … she probably saw my discomfort when we asked for a shoe shop and decide to help out!

Cerveza time – the best time of the day 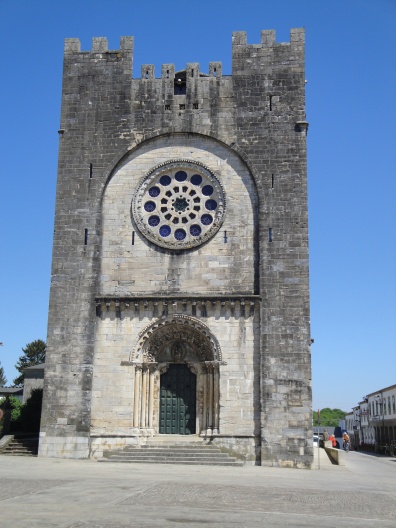 The Romanesque church of San Nicolas. This church was rebuilt stone by stone from its original site (which is now under water)

We walked around in the town of Portomarin and after we took a couple of photos and enjoyed the view over the Mino River, we bought ingredients at the local shop to prepare dinner later.

Berto made a delicious chicken paella in the kitchen of the albergue and we relaxed with one of Spain’s famous red wines.

While we were preparing our food, a pilgrim from Japan walked into the kitchen. He had a piece of (very old) bread and ‘jamon’ that he got from a farmer a few days ago. It certainly did not look all that fresh anymore and we invited him to share our chicken paella. He happily accepted and we spent the rest of the evening around the kitchen table.

He later told us that his dad past away a couple of months ago and that he then decided to walk the Camino in memory of his dad. He said that he initially only had enough money to buy his flight tickets. As for the rest (accommodation and food), he was relying on his fellow pilgrims and the hospitality of the Spaniards.

And until now, more than 700km later, he was not disappointed by his fellow man. He thanked us for inviting him to dinner tonight, unaware of his circumstances.

Lesson learned: Share with your fellow man … you never know what this can mean to that person

When we went to bed that evening, we were grateful for being able to embark on this journey and to share with our fellow man.