After we’ve slept in a full dorm – I think we’ve been at least 30 pilgrims in one room – we’ve once again got up early. Some pilgrims were sleeping in the communal area on couches – due to too much snoring in their dorm (Berto might be one of the guilty snorers 😉).

When we’ve left our albergue, the sun has not even risen behind the mountains and it was bitterly cold … there was frost on the grass next to the road and we’ve had our gloves, jackets and buffs on. At least we’re expecting a day of no rain … we just need to hang on for a bit of heat until the sun rises. 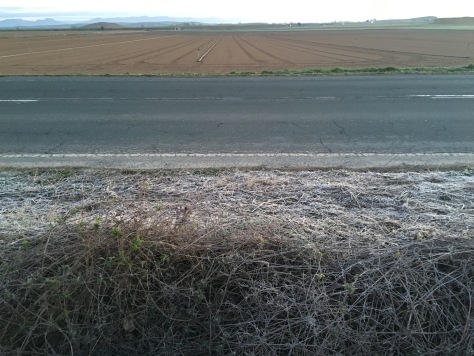 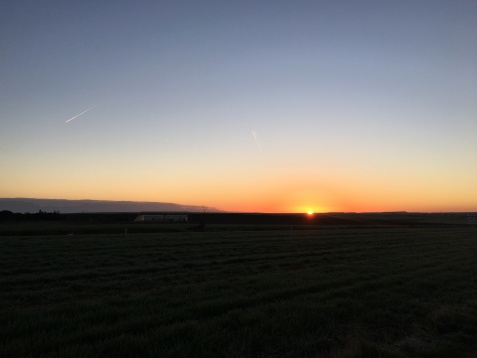 Early morning frost on the grass – just 1°C and the only way to warm up, is to keep walking. But then, at last, the sun appears and there’s the promise of some heat

It seemed that a lot of walking would be done close (or next to) the main road today. We would therefore need to look out for traffic and concentrate a bit more on the yellow arrows.

Green fields after we’ve gone through Granon … we’ve just came out of a dry summer in South Africa and these green fields were a lush for the eyes!

It was still early morning when we’ve walked through the smaller villages and we’ve only seen a couple of pilgrims along the way.

In Castildelgado we’ve seen Conchi and Pili and spent some time posing for a photo and chatting. They’ve started even before us this morning and said they’ve struggled to sleep in the noisy albergue last night. Because we’ve started so early this morning, it means we will be in Belorado, where we will stay for the night, long before lunch.

Me, Conchi and Pili in Castildelgado – still dressed in all of our warm clothes. It was a chilly day, but fortunately no rain was forecasted

Although we could see the main road, we’ve stayed on wide dirt tracks for most of the time. It was only the last 5km to Belorado that we’ve walked literally next to the busy main road.

I could hardly put one foot in front of the other as we’ve walked into Belorado. It was a brisk walk today … probably to try and get some heat in our bodies, but I’ve paid the price with 2 new blisters on my little toes. As we’ve got to our albergue, Cuatro Cantones, the doors were still locked. Berto wanted to buy us some cold drinks, but I’ve decided to sit right there on the pavement in front of the locked doors of the albergue – I’ve taken my hiking sandals and socks off and moved nowhere for an hour!

As the albergue opened, we were fortunate to get a room with only 2 bunk beds and I’ve taken my chance to sleep on the lower bunk bed – don’t think I will be able to get to an upper bank bed tonight! 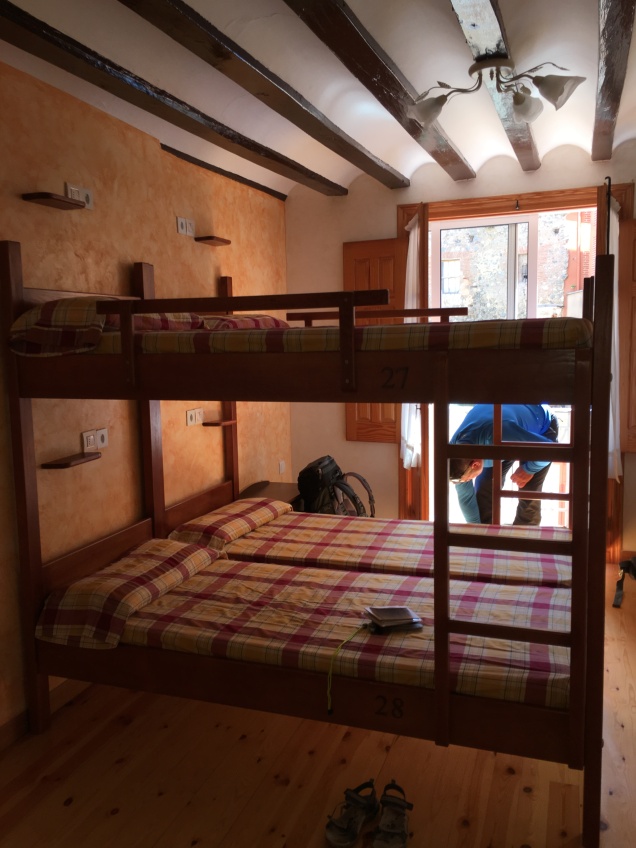 Our beds in Cuatro Cantones with a beautiful bathroom

Later that afternoon three elderly Korean men came in and got the room next to us. We’ve seen them since our second day on the Camino and they are such friendly gentlemen. Although they’ve lived in the USA for the past 20 years, they don’t speak fluently English, but we could have a decent conversation with them … Berto called them “The three wise men” (they had such a lot of wisdom between them and shared life stories with us that I will always remember).

After we’ve done our laundry, we’ve sat in the beautiful back yard of the albergue where we had our lunch. There was a bright blue swimming pool and I could just imagine how tired pilgrims will cool off in this pool during the hot summer months. It was however a bit cold for us to get into the pool, but the sun was shining and we were enjoying the heat of the sun on our bodies.

The beautiful back yard at Albergue Cuatro Cantones – no, we did not get into the swimming pool!

Late afternoon we’ve explored the town a bit and bought snacks for the next day. I was more excited to see a pharmacy where I’ve bought some plasters and patches for my leg 😁

We’ve had dinner at the albergue. Berto had pork chops and chips and I’ve enjoyed a nice plate of seafood paella. After a bottle of red wine, we were ready to dive into our beds.