According to Brierley’s guide book, there are three different routes you can take to reach O Cebreiro. After yesterday’s hot and long walk, we decided to take the least strenuous route – although, it still has promised a steep uphill towards the end.

It was just after 6:30 when we left our albergue. We had a good night’s sleep in our own room – this was needed for the walk today. Though we walked along the main road, there were few cars and not as busy as we expected. This might be because of the completion of the new A-6 motorway – we could see the evidence of high bridge running over the old N-VI.

The new A-6 motorway high above the old main road

We could also see the change in nature. We were now entering Galicia and the fields were green, with many small streams. 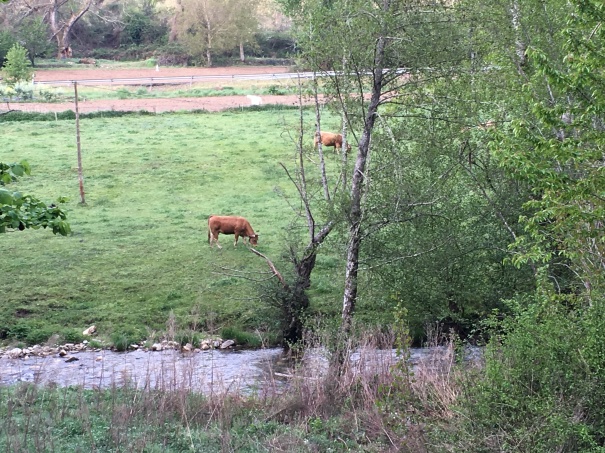 Just before Trabadelo, we walked past different stacks of wood. Berto and I were discussing how nice it would be to have some of these pieces of wood for our fireplace back home – it will be winter when we go back to South Africa! I was surprised at how neatly the different logs were stacked together – obviously someone took great pride in their work.

Wood stacked next to the road, neatly packed together

We really enjoyed the walk thus far. It was a cool morning, but not as cold as previous days. On some Camino blogs we have read that once you’re entering Galicia, you will see many cows … and it was definitely the case this morning. Some of the cows were even in the road and we had to take extra caution to walk around them.

Who’s got right of way

In Trabadelo we saw a couple of pilgrims – they either opted for the same route as us or the second least strenuous route (as per Brierley’s guide book). Everyone was talking about that last steep climb to O Cebreiro … I was a bit apprehensive, because I did not know how my blistered feet would handle the climb.

Somewhere, close to Vega de Valcarce, we noticed a bakery next to the road that looked really inviting. Berto ordered a toasted ham and cheese sandwich and I could not resist the lemon cake. We enjoyed these with our normal café con leche. Just what we needed before we get to the last stage of today’s walk. 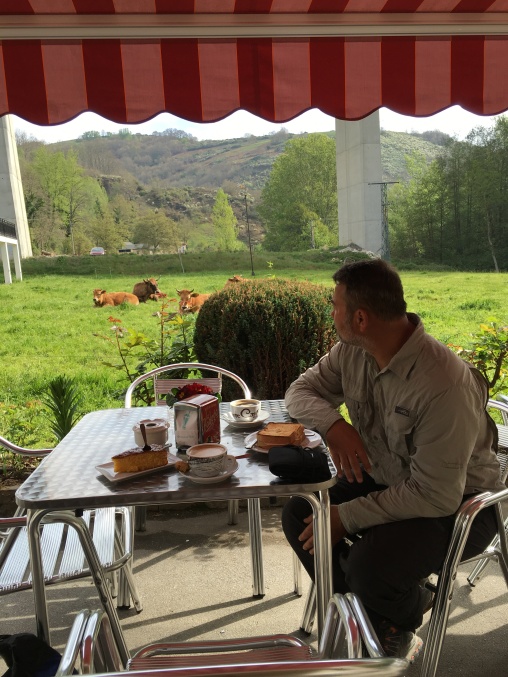 Time for a snack … and a view to remember!

We were walking through some quiet villages along the river and I was thinking how beautiful the scenery was … until suddenly, a steep uphill appeared. Although it was steep, it was beautiful. We looked at each other, recognising this is THAT uphill everyone was talking about. We took a deep breath, then put our heads down and started walking the uphill.

To my amazement, a lovely colourful butterfly ‘joined’ me from the moment the steep uphill started and accompanied me for the full duration of the climb. My father used to love butterflies and I was wondering if it was him (or an angel) in the form of a butterfly that were encouraging me to the top … it was actually quite an emotional walk … and in the end, a walk I thoroughly enjoyed despite my blistered feet. 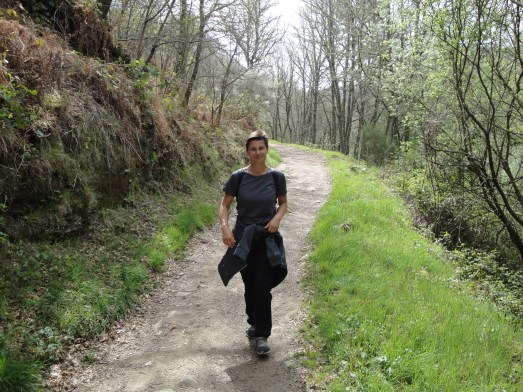 On a flatter part of the road, through beautiful woodlands

Almost at the top – our heart rate definitely increased

And then, as sudden as it started, we have reached the top and the scenery was breathtaking beautiful! We saw green rolling hills in the distance and you could almost see O Cebreiro … although it was another 6km to go. 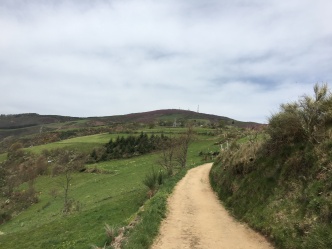 On the final little uphill, a man and his two horses came from the top. We saw earlier in one of the smaller villages that, for a fee, you can do this stretch on horseback up to O Cebreiro. We were however happy that we walked this stage.

A man and his horse coming down from O Cebreiro

We were now officially in Galicia

As we walked into O Cebreiro, it was with a feeling of satisfaction. The steep uphills were every drop of sweat worth the breathtaking views and O Cebreiro is a beautiful village with their church dating back to the 9th century. There were many tourists (that came by bus) and with pilgrims streaming in later that afternoon, it became quite a busy little town.

Iglesia de Santa Maria Real – according to Brierley’s guide book, this is the oldest extant church associated directly with the Pilgrim way 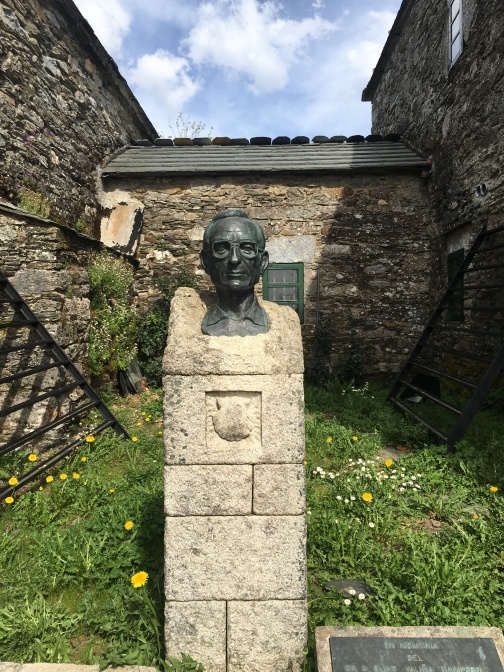 Statue of Don Elias Valina Sampedro (1929-1989). He was a parish priest and it was his idea to mark the Camino with the yellow arrows that every pilgrim is following today during their journey

We walked to the Albergue Xunta at the end of the village where we each got a bed. It was a HUGE dorm with many bunk beds (maybe 40-50 beds). Two cyclists joined us when we walked into the albergue … we were the first ones there and could therefore chose any of the beds. I decided that, after today’s challenges, a lower bunk bed would be nice and chose mine next to Berto’s bed … it was almost like a double bed.

By the end of the evening, the dorm was filled with pilgrims – every bed was occupied! I was wondering where all the pilgrims came from, because we have not seen so many pilgrims on our journey thus far … maybe O Cebreiro is just a very popular village on the Camino.

Before we embarked on this journey, we saw on various Camino platforms pictures that were shared by pilgrims where O Cebreiro was covered in snow and with icy conditions – even during spring. But we were lucky to enjoy this village in bright sunny weather.

We also met two South African women who were sitting in front of a bar. They heard us speaking in Afrikaans to each other and called us over for a chat. We asked them what they thought about the steep hills of today’s walk, but they admitted they were more into ‘slack packing’ and chose not to walk the last part of today’s stage. They also prefer to rather stay in hotels and not albergues. It is clear that each pilgrim does the Camino as it suits them … and there is nothing wrong with that. Whether it’s how we do it, or just a small part of hiking and then the rest by bus or taxi – in the end it’s your Camino and you decide how you want to do this journey.

Dinner was at one of the small restaurants close to our albergue where Berto ordered pasta and I could not resist the Galician soup that our Spanish friends told us about. It was really nice and I enjoyed two servings.

I thought that it would be difficult to sleep between so many people after we had our own room the previous night, but O Cebreiro’s steep uphills ensured that I did not struggle to sleep at all.

Somewhere during the night, I woke up to go the bathroom and when I came back, it was with astonishment that I heard all the different sounds … snoring, coughing, turning around in noisy sleeping bags and more snoring!

I could only smile … where in the world will you ever encounter something like this?